Searching for the right color…

As you work on some restoration projects, you eventually have to start considering painting and the question, “What is the correct color to use?”.   In the case of our ex-New York Central ‘Empire State Express’ cars, the exterior paint/color answer is easy.   Stainless steel.  No paint required!   Yet, the interiors for the cars are another question.   For now, our focus is on the interior of NYC #2567, and what is the correct color to paint the interior.   At 68 years old, the car has certainly seen several interior paint jobs.   It has also seen two configurations; its original 56-seat long distance configuration and its current 80-seat 2-by-2 walkover seating configuration.   For the R&GVRRM, we will be retaining the second configuration, but want to know what colors the interior was painted to allow us to decide how to properly restore the interior.

There are two ways to determine paint color and typically a combination of both can be very powerful.  Having paint samples/drift cards or paint names/paint codes from the manufacturer or railroad is the first.   Doing some careful detective work on the paint already in the car is the second.   For the R&GVRRM, we currently are only able to investigate the paint in the car as we hope to find a source for paint information.   That is what we did during our Tuesday evening work session of 11/17/2009. 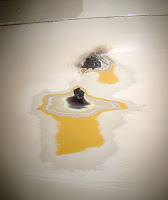 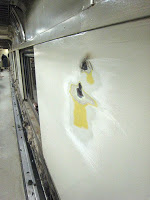 Two areas of the car, the wall panel between two of the windows and the wall up near the ceiling of the car toward the end of the car, were investigated by careful sanding:   Both areas showed the same layers of paint, so only the wall is shown here.   The buff color paint on the surface is paint the museum applied which was close, but lighter to what was on the walls when the museum acquired the car.   The darker buff color can be seen followed by a yellow under that followed by some primer layers followed by another layer of a buff colored paint followed by several primer layers.   The assumption which the museum would love to have confirmed is that the buff color closest to the steel is probably the original color.  The is corroborated in photographs taken by noted New York Central photographer, Ed Nowak.   The colors after that are just a guess, but the assumption is that the yellow may correspond to the rebuilding of the cars into the commuter configuration and the buff would be a later repaint.  Possibly the yellow may have come before the rebuilding to the commuter configuration.   More investigation in areas of the car that would have been new to the car at the commuter rebuild may shed more light into the painting history of the car.   The R&GVRRM would also certainly welcome anyone with information on the history of the cars to please contact us.  It will be greatly appreciated.