The old Erie Railroad depot at Industry has a long history stretching back to the late 19th century. The tracks in front of the depot were laid in 1853 by the Rochester & Genesee Valley Railroad, and the first depot on this site was built at the same time. From 1853 to 1874, this stop served the village of Scottsville, some three miles away to the west. The depot provided the village with daily mail, express and passenger service. An omnibus ran from the village and connected with all trains. In the early years before the Mount Morris Dam was constructed, the Genesee River would inundate the flood plain between the village and the depot. Towns folks would have to resort to using a rowboat to reach the depot. 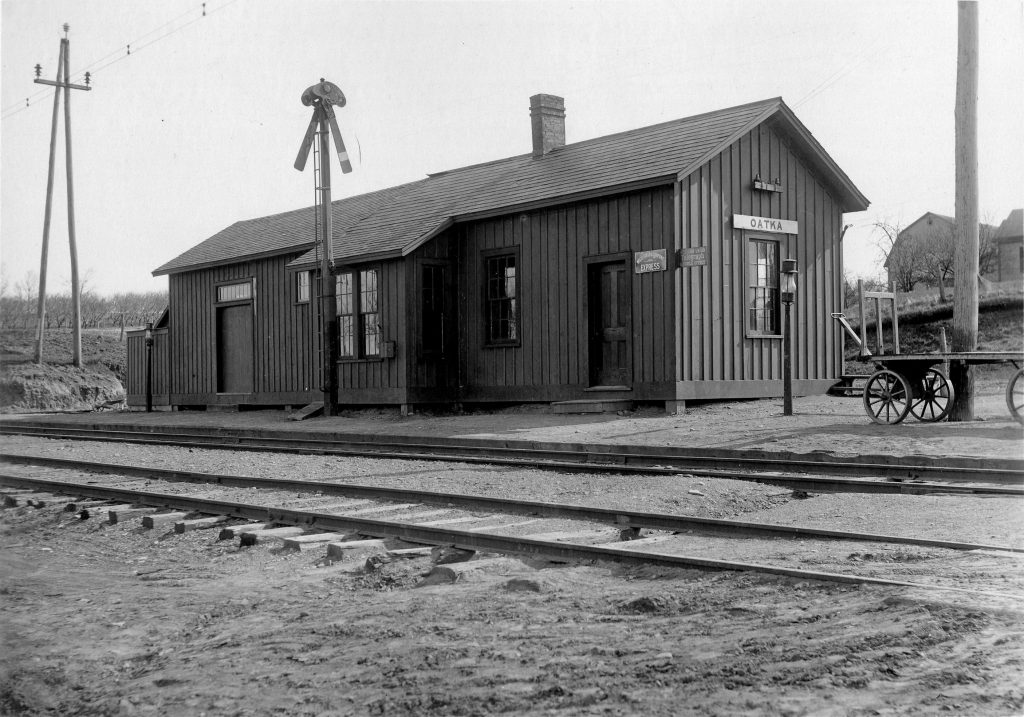 The first depot on our museum site was replaced by the present structure between 1908 and 1909. The original structure was moved to the north to become the freight house. Photo by J.E. Bailey, Photographer, Erie Railroad. Rochester Division. Collection of Jim Hutzler.

In 1858, the Rochester & Genesee Valley Railroad was leased to the Buffalo, New York & Erie Railroad, which in turn was controlled by the Erie Railway. Meanwhile on the other side of the Genesee River, the Rochester & State Line Railroad reached the village of Scottsville proper in 1874. Now that they had a depot right in their own village, the R&GV depot became less attractive to the local citizens. Usage dropped off considerably at this time.

The former R&GV station was named “Scottsville” until 1903 when it was renamed “Pixley” after a station agent who served many years. The depot’s name was changed to “Oatka” in 1906, which still did not reflect its true location. The present depot was built around 1909 and the name was changed to “Industry” on October 20 after the newly established state school for boys across the street. The depot features two waiting rooms, separated by the agent’s office. It was custom of the time to provide separate waiting areas so that men could smoke and say unpleasant things without offending the delicate female patrons. In later years, the separate waiting room was used to segregate inmates from the state school from the public. 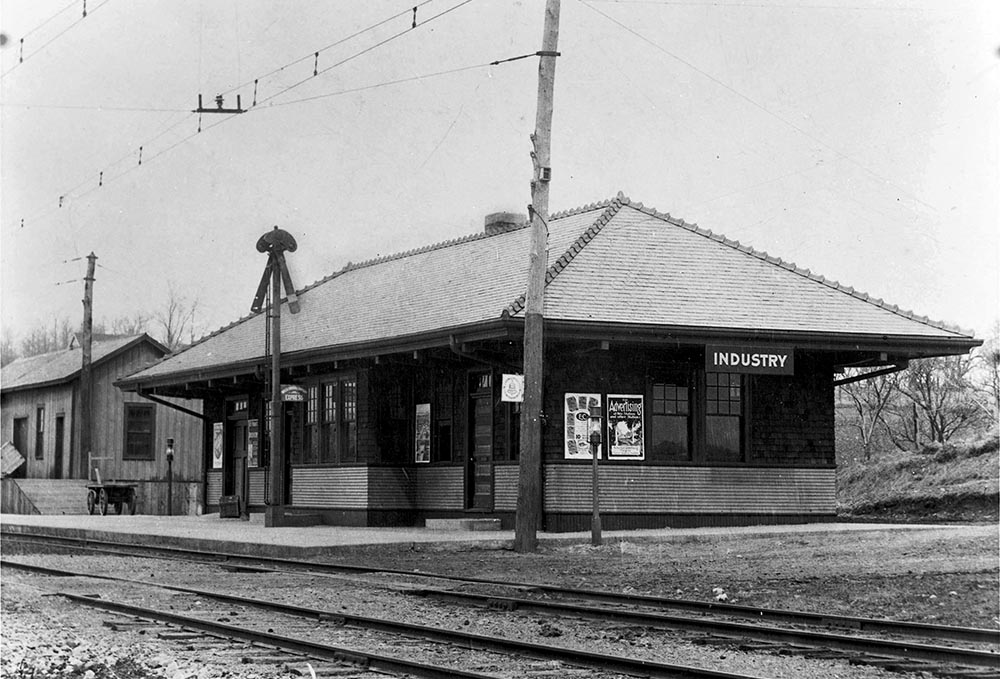 Early on, the Erie saw the potential of commuter traffic along this line and embarked on their first electrification project. Overhead wire was strung from Rochester south to Avon and west to Mount Morris. The new schedule called for 26 to 30 trains to call at Industry! The 34-mile electric line was put into service on June 18, 1907. The route from Rochester to Mount Morris was covered in about an hour and ten minutes, and hourly service was provided from 6:00am to 11:30pm. While popular, the improvements never managed to pay for themselves, and electric service was discontinued in 1931. The last passenger train stopped at Industry on September 30, 1941, and the depot was closed as an agency in 1950.

Over the years, the Erie survived a few name changes and bankruptcies and merged with its long time competitor to form the Erie Lackawanna Railway in 1960. By this time, the depot was used for storage by the railroad. The Rochester Chapter of the National Railway Historical Society was seeking a permanent home and possible museum site for its activities, and discovered Industry depot was available. The depot had been abandoned since 1957, and by December 1969, the Rochester Chapter had adopted it as their new home. The depot was purchased outright from EL in 1971 for the ceremonial sum of $1.00. 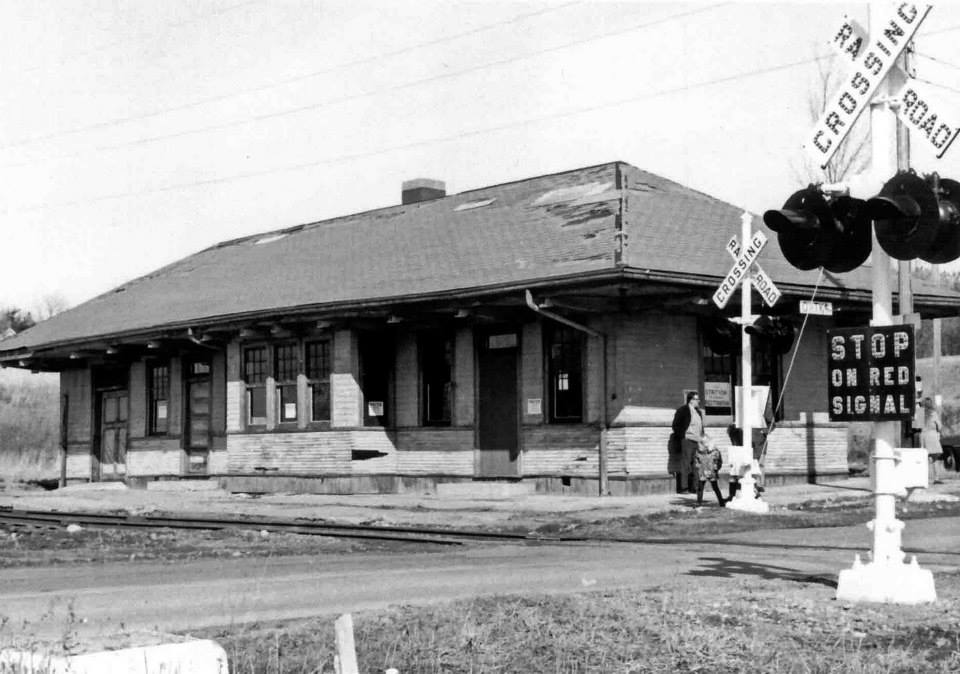 In the following years, volunteers restored the depot to its 1930’s appearance and built a three-track yard to display historical pieces of railroad equipment. The first pieces of the museum’s collection were delivered to the new yard at Industry in 1981. In 1995, volunteers drove the golden spike on a two-mile demonstration railroad and began operating public track car rides following year. We soon expanded to include diesel train operation for special events. Beginning in 2015, you could once again purchase a ticket from our agent inside the depot and board a train outside the depot! 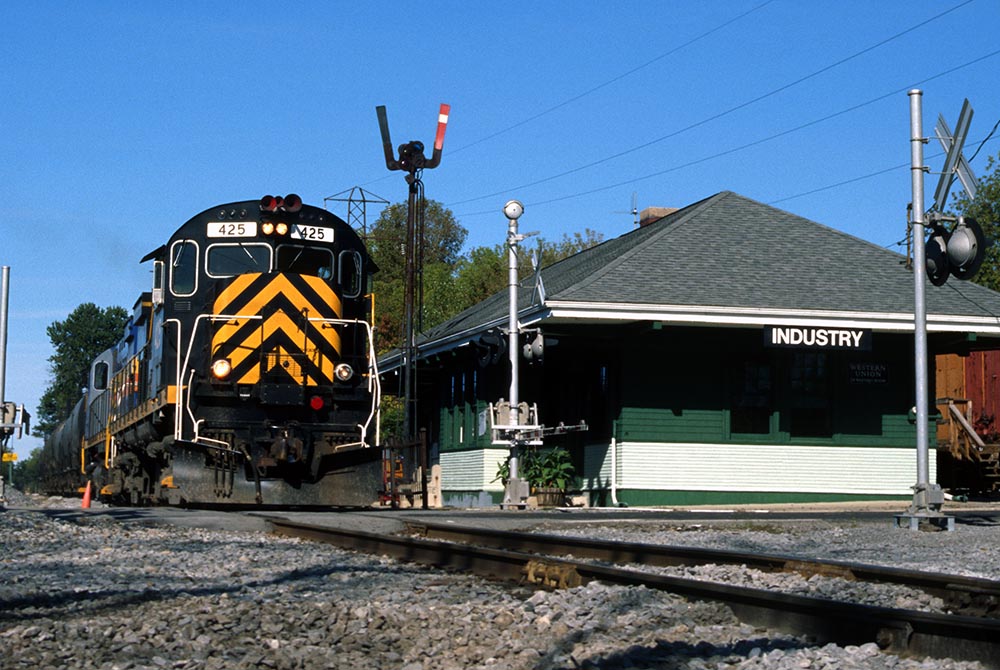 Industry depot remains the cornerstone of the Rochester & Genesee Valley Railroad Museum, and we look forward to your visit for our special events June through October. We always encourage visitors and potential volunteers to visit us throughout the year! We are located at 282 Rush-Scottsville Road (Route 251), easy to find from Exit 11 off I-390.