To the new siding…

On Sunday, January 15th, 2012, the R&GVRRM in cooperation with the Livonia, Avon & Lakeville Railroad moved the museum’s ex-New York Central Empire State Express passenger train set to its new siding after two years of work by the museum’s volunteers excavating, building, leveling and tamping the track. 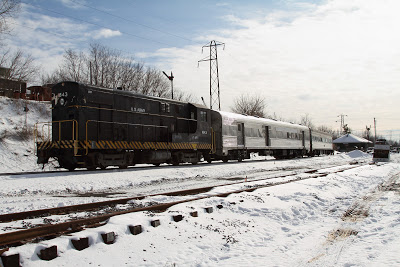 The R&GVRRM’s ex-U.S. Army Fairbanks-Morse H12-44 #1843 has two of the museum’s passenger cars already switched out of Industry yard and on to the LA&L mainline.
Photo by: C.R. Hauf
With LA&L crews in charge and working in cooperation with the R&GVRRM Operating Department, all seven cars were moved to the new siding west of the LA&L across this Sunday.   The museum’s ex-Lehigh Valley Railroad caboose #95100 and NYC flat car #506102 were moved back to the museum from storage on the new siding. 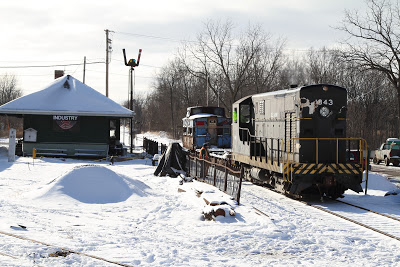 USA #1843 sits with NYC #506102 and LV #95100 in front of the Industry depot.  These cars were returned from storage on the new siding to the R&GVRRM so that restoration work could begin.
Photo by: C.R. Hauf 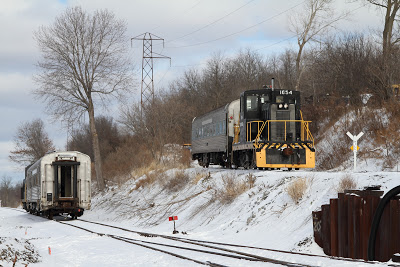 R&GVRR GE 80-tonner #1654 brings another coach down the R&GVRRM’s restoration shop where they have been stored and worked on.   The car will be switched out on to the LA&L main to a waiting USA#1843 and two of the ESE cars.
Photo by: C.R. Hauf 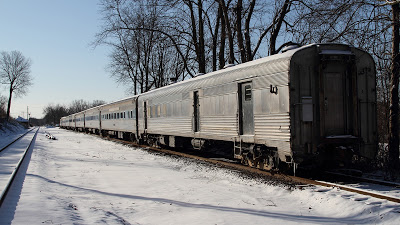 All seven cars sit on the new siding.  The R&GVRRM’s Industry depot is in the distance on the far left of the image.
Photo by: C.R. Hauf

The R&GVRRM would like to thank the LA&L for their continued help and support!   We would also like to thank everyone who has donated money toward our Donate-A-Ton fundraising campaign which was used to purchase ballast for the new siding.   While we still need a few more tons donated for some more ballast to complete some leveling work on the siding in the spring and for future extensions of the siding, the great support we have received has allowed us to “move in” to the siding and achieving our goal!   Thanks!!!