When restoring a railroad car, there is the major work on the car, but there are also the many small details that need to be restored as well.   In this case, the restoration of the bathroom mirror in ex-New York Central Empire State Express coach #2657 which is seeing an interior restoration in the R&GVRRM‘s shop. 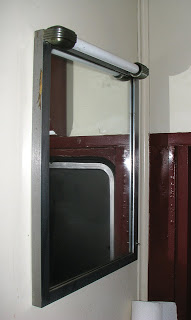 We have a lot left to do on the #2567 including repainting the bathroom.   Thus the mirror need to be taken down and itself needed some restoration work to return it to its former shine and function.    Here are a few images of the progress on the restoration of this mirror which was install in the car by the New York Central when the car was converted from a 56-seat long distance coach to an 80-seat commuter car in the late 1960s.

The mirror is a combination of chrome and aluminum pieces.   It includes a light on top which turns on by a small switch on the lower right front of the mirror.   The light bulb is actually an incandescent fixture and uses a GE light bulb called a Lumiline bulb.   Amazingly, these bulbs are still being made by GE although they are now very expensive after once being very common in bathroom type fixture likes this one.

In a stroke of good luck, the mirror actually comes apart.  The glass mirror was removable from the frame and the light sockets unscrew from the frame.  This made cleanup much easier which included a general wash with soap and water, followed by a treatment with Duro aluminum cleaner and then followed by a polishing with Mother’s Mag & Aluminum polish.   As for today, all of the parts have been cleaned and the mirror is starting to go back together which will include new wiring.   Look for pictures soon of the completely restored mirror. 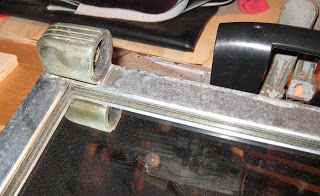 Top corner of the mirror before dis-assembly showing corrosion from 40+ years of service.

Before cleaning (left) and after cleaning (right) of the light sockets.