Sixty plus degree sunny days in November are very few in Rochester so the volunteers of the Rochester & Genesee Valley Railroad Museum took full advantage of this rare day on November 7, 2009.

The west siding excavation project is drawing closer to being completed as the site is coming to grade.   Some finishing work was being done by the museum’s Huber-Warco road grader and the museum’s Case 580 Super K backhoe.   This day’s work was built on work done on October 27th shown in this YouTube video with a nice surprise from the Livonia, Avon & Lakeville Railroad.

All of the progress can seen here in these two views looking from the south end of the excavation site toward the already installed siding seen to the right of the tree line in the distance.   The magnitude of the dirt moved can be easily seen in the second view. 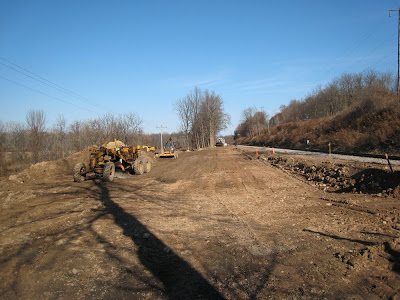 ‘Empire State Express’ coach work
The work on the museum’s ex-New York Central ‘Empire State Express’ cars continued in earnest, and it was nice to be able to work both inside and outside.   In the museum’s restoration shop, work on the interior refurbishment of NYC #2567 continued with some detail painting of the bracketry that holds the decorative stainless steel heater covers and the seats. 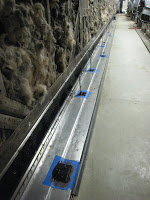 While the majority of the car is built from stainless steel, there brackets are carbon steel and thus required a solid coat of paint to prevent them from rusting. 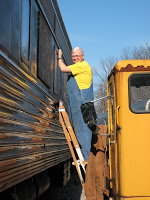 Outside the shop, museum volunteer, Dave Peet, was busy installing one of the new reglazed window modules into another one of the coaches.   The museum set a goal to replace all of the glazing in all five of its operating coaches.  It has completed the reglazing and temporary replacement of the windows on four of the five cars.   The museum still needs to go back and permanently install the window modules in all of the cars, but great progress has been made on this tough and tedious project.

The museum always welcomes new volunteers to come and join us.  We also need your financial support to keep these projects moving forward.