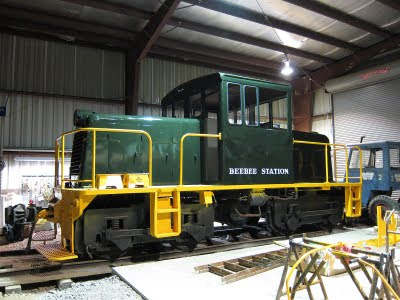 General Electric 45-ton diesel switcher RG&E #1941 sits inside the museum’s restoration shop with the yellow paint coats complete, the “BEEBEE STATION” lettering applied, and the R&GVRRM logos added to the newly constructed and painted step boxes to go with the engine. We now need to start putting parts back on, get the RG&E logos made and on the cab sides along with tackling the black paint on the deck and undercarriage. We are also still waiting on the newly fabricated cab slider windows so we can paint and install them.

This historic locomotive was donated to the museum in 1991 after working for Rochester Gas & Electric’s BeeBee Station for more than 26 years. Originally built in 1941 for use at General Electric’s Riverworks Plant, it was later sold and operated by a number of different owners before coming to the Rochester area in 1964. It was originally purchased by the Livonia, Avon & Lakeville to be their first diesel locomotive, but was sold to Rochester Gas & Electric in 1965 before ever seeing service on the railroad.

We hope you’ll join us this weekend for Diesel Day on Sunday, August 21 so you can see the results of all our hard work! —Photo by Chris Hauf