The Rochester & Genesee Valley Railroad Museum was very fortunate to receive the donation of two new locomotives which previously served Rochester Gas & Electric’s Russell Station in Charlotte, NY. With the plant closed, RG&E was very generous to donate the locomotives to the R&GVRRM where the join RG&E #1941 which once served RG&E’s BeeBee Station generating plant in downtown Rochester. It took new fewer than four railroads to deliver the engines to the museum in Rush. Here we see delivery day by the ALCOS of the Livonia, Avon & Lakville Railroad shown here roaring past the engines post delivery on the R&GVRRM’s new passenger car siding. 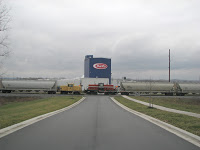 With a north facing switch, the LA&L decided to take the locomotives south past the R&GVRRM on December 3 and deliver them as part of a northbound freight on December 4. Here we see the engines passing the new Barilla Pasta plant just north of Avon. 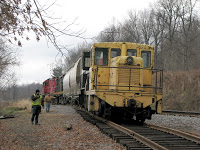 The switch for the R&GVRRM’s new siding is located approximately 2000 feet north of the museum’s Industry depot. Here we see #1950 and #8 being shoved into the siding by the ALCO Centuries of the LA&L. 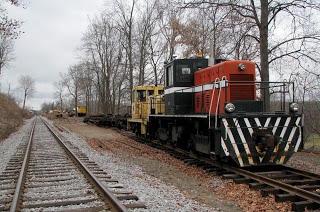 With the LA&L headed north, here we are looking south at the new locomotives on the siding along with the museums two ex-New York Central flat cars which are being used for rail and track material storage for the continued construction of the siding project.