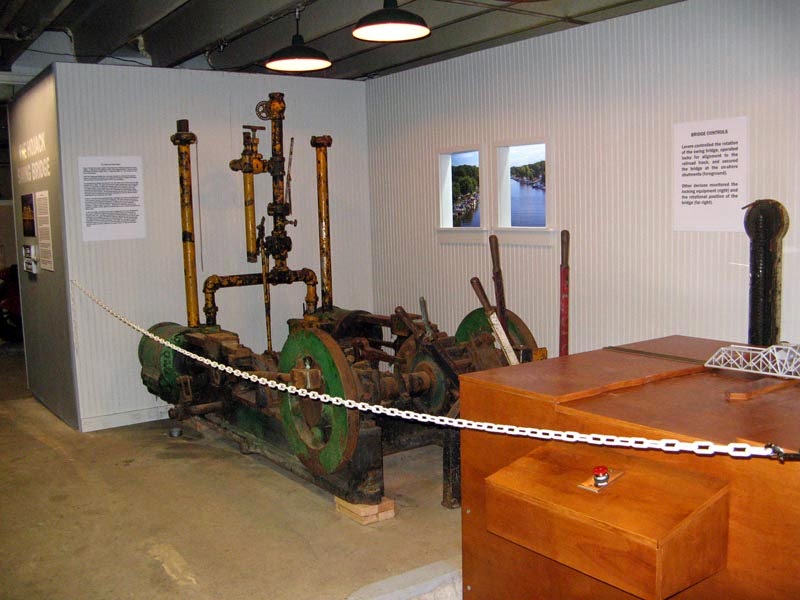 Our partner operation New York Museum of Transportation is excited to announce the opening of a new permanent exhibit. A re-creation of the control cabin of the Hojack Swing Bridge contains the original steam engine, control devices, and an operating model of the bridge.

New York Museum of Transportation, located in the town of Rush, near Rochester, NY, is pleased to announce the opening of a new exhibit honoring the history of the Hojack Swing Bridge.  The exhibit contains the original steam engine, control devices, a working model of the bridge and explanatory labels about the bridge, its builder and the railroads that used it to cross the Genesee River.

Built in 1905 by the King Bridge Company, the bridge originally carried trains of the New York Central & Hudson River Railroad.  It was designed to rotate 90 degrees when required to permit passage of river traffic.  Power for the rotation was provided by a steam engine located in a control cabin atop the 304-foot long bridge.  This engine, a product of the Lidgerwood Manufacturing Company, had two cylinders and was rated at 50 horsepower.  The engine is now a main feature of the museum’s exhibit.

When the bridge was no longer needed for rail service, U.S. Coast Guard regulations required its removal.  CSX Transportation Company, owner of the bridge, generously offered to salvage the steam engine and related control devices provided they be used in an exhibit to preserve the bridge’s history.  A grant was provided by the railroad in support of such an exhibit, and a proposal by the New York Museum of Transportation was selected.

The museum’s exhibit design recreates the interior of the control cabin.  The steam engine and control devices are on display with explanatory texts.  Also included is a scale model of the bridge which visitors can operate to align it for the miniature railroad or to clear boat traffic on the river.  Two windows looking out over the Genesee River add dimension and an extra note of realism to the exhibit.  The entire exhibit was constructed by museum volunteers.

The New York Museum of Transporation is open Sundays year-round. For more information, you can visit the NYMT’s web site.