From the archives… Ride the Auburn Road on October 3, 1965 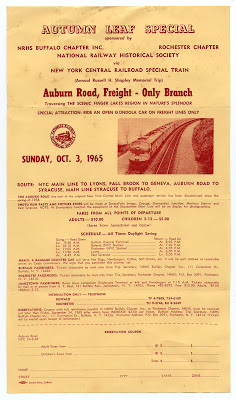 On Sunday, October 3, 1965, the Rochester & Buffalo Chapters of the National Railway Historical Society ran an Autumn Leaf Special with a portion of the ride on the then freight only New York Central ‘Auburn Road’.   The trip started in Buffalo with the route being the New York Central main to Lyons with stops in Batavia & Rochester then the Fall Brook to Geneva then the Auburn Road to Syracuse and then the main line all the way back from Syracuse to Buffalo.   Cost for this all day excursion?   $10.00 for adults and $5.00 for kids!