From the archives… An Empire State Express souvenir… 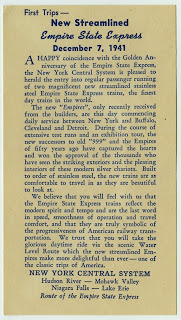 While December 7, 1941 is best known for one anniversary, Pearl Harbor Day, it is also an anniversary for those interested in the passenger operations of the New York Central Railroad.   On this day, the New York Central debuted its newly re-equipped  Empire State Express.   Two trains of new Budd built streamline equipment went into service as the Empire celebrated its 50th anniversary.  To let riders know about the special day, a souvenir was offered.  A postal cover from the first run canceled on the train’s RPO car which included a specially printed envelope and the card to the left highlighting details of the streamliners inaugural run.

Here we have two examples of the cover’s specially printed envelope.   One for Mr. Earl Horsington in Skaneateles, NY and one for Mrs. M. Munson in Whitesboro, NY.   One typed and one handwritten.

Thus as we remember Pearl Harbor Day, some railroad historians take note of this New York Central anniversary.  It has a special meaning for the Rochester & Genesee Valley Railroad Museum as the museum rosters seven cars from the 1941 re-equipping of the Empire.    Six coaches and one RPO (possibly the RPO that made the cancellations above) are under active restoration at the museum for continued use in excursions.    So the Empire State Express lives on here in the archives of and in the preserved equipment of the Rochester & Genesee Valley Railroad Museum.    Want to help us continue to preserve both?  Please consider a donation to help support our museum efforts.   We also welcome people to come out to help us work on both our archives and our equipment.

And more to come… From the archives of the Rochester & Genesee Valley Railroad Museum.