The Erie Railroad had a station in downtown Rochester.   Located on the south side of Court Street on the west side of the Genesee River, the station was the end of the line for the Erie’s Rochester Division which passes by the Rochester & Genesee Valley Railroad Museum in Rush.    Long gone having been torn down many years back, one can only wonder about the details of the daily operation of the Erie’s downtown station.    Well…  Here is a snapshot in time of the station; an audit form from January 24, 1927 showing its employees with their wages, its scope & equipment and its revenue. 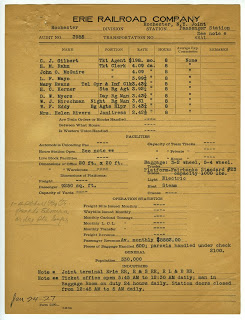 The Erie station had ten employees, at least two of which were women.   We find that Mr. C.J. Gilbert was the ticket agent at the time.   He made $198.00 per month.   There were 3 ticket clerks, one telegraph & information clerk, one station baggage agent, one day baggage man, one night baggage man, one baggage agent’s helper, and one janitress.
We find that the office was 20’x20′ with 9250 square feet of passenger platforms.  The depot was equipped with three two-wheel and five four-wheel baggage carts along with a Fairbanks Standard #23 platform scale.
Monthly revenue was $8582.00 while the station handled 600 bags and 2100 parcels “under check” while serving a population of 330,000.
Finally we note that at this time, the Erie’s Rochester station not only served the Erie, but also included the interurban lines: the Rochester & Syracuse RR and the Rochester, Lockport & Buffalo RR.
A very interesting snapshot in time of one of Rochester’s several railroad stations.