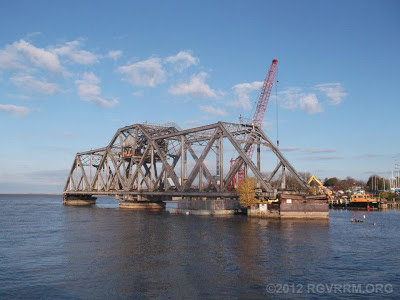 Built by the King Bridge Company in 1905 for the New York Central Railroad, the so-called Hojack Swing Bridge replaced an earlier span built by the Rome, Watertown & Ogdensburg Railroad (nicknamed the “Hojack” line). Operation of the route passed to Penn Central and Conrail, and the last movement over the bridge took place in the mid-1990’s. With no customers remaining, the route over the bridge was abandoned, and successor CSX petitioned (along with the Coast Guard) for its removal. Crews began the dismantling process at the beginning of November, delayed a few days by storm conditions created by Hurricane Sandy. This view is from the west side on November 6, 2012, photo by Otto Vondrak. 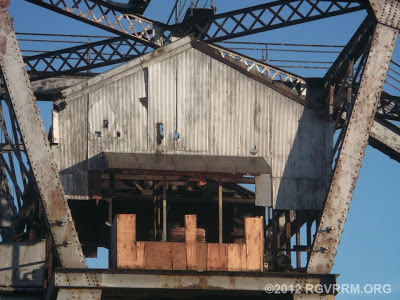 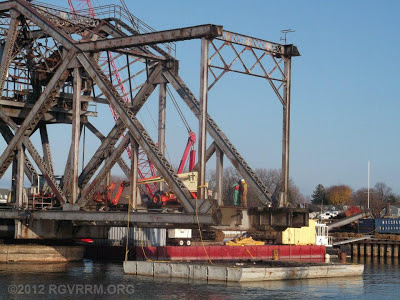 A few days later, a significant portion of the bridge has been removed. Two workers can be seen on the bridge planning their next move. Photo by Otto Vondrak, November 16, 2012. 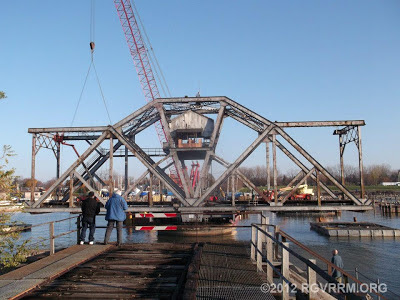 As seen from the west side. Many folks were out observing the dismantling and taking pictures. Photo by Otto Vondrak, November 16, 2012.