If you grew up in Rochester, you probably heard about the man who saved a steam engine from a scrap yard and brought it to his home in Henrietta. Maybe you were one of the lucky few invited to visit it. Maybe you thought it was scrapped years ago. The legend of the “Five Spot” runs deep, but we’re excited to share that not only is it real, but it’s new home will be the Rochester & Genesee Valley Railroad Museum.

According to records, DSI 5 was purchased from Vulcan Iron Works in Wilkes-Barre, Pa., in 1924, for exclusive use at MDT’s Despatch Shops in East Rochester, N.Y. The 0-4-0 saddle tank switch engine, serial no. 3343, was shipped to DSI on March 31, 1924. There, it was immediately put to work on a construction project to expand the storage yards around the shops, hauling side-dump cars full of dirt and debris. We assume it spent the rest of its career as a shop switcher working around the East Rochester campus in various roles.

Steam operation on New York Central’s lines east of Buffalo came to an end in 1954. When New York Central assumed control of the MDT shop in East Rochester in 1955, No. 5 was retired. The engine received a fresh paint job and was displayed outside the Despatch Shops offices before it was sold to Rochester Iron & Metal. It was placed on display outside the scrap yard’s offices off St. Paul Blvd., next to the NYC main line at High Falls. 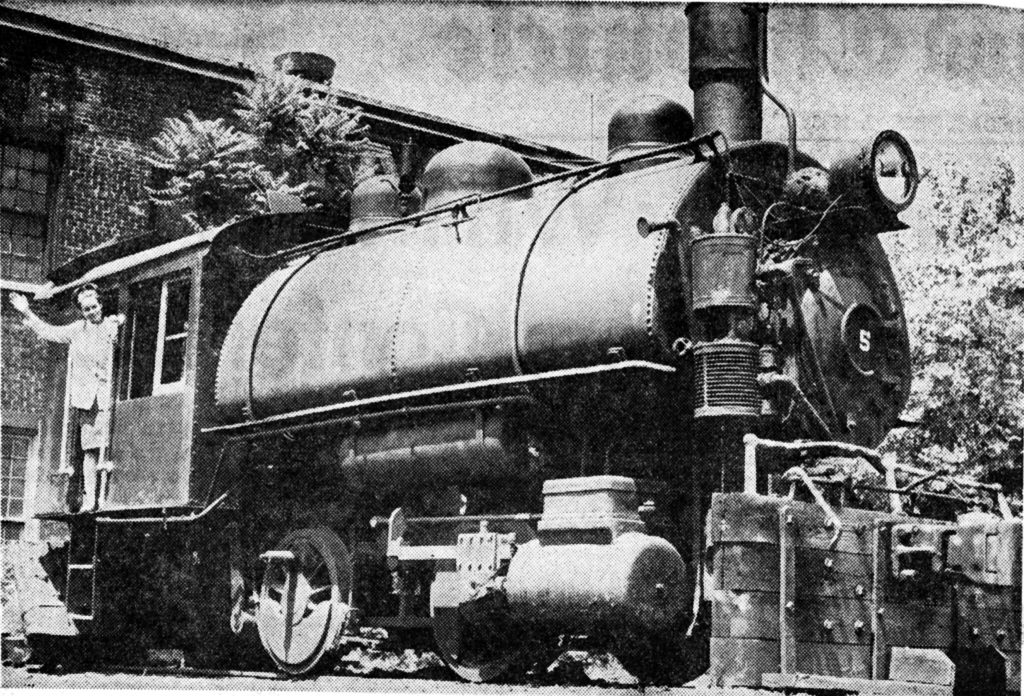 It was around this time John Virgilio took an interest in the engine. Following the tradition of his father, John enjoyed a brief career on the New York Central as a fireman and brakeman from 1949 until 1954 when diesels replaced steam. His family had been collecting railroad artifacts at their farm in Henrietta for some time, with the hopes of someday opening a museum where children could learn about the “golden age” of railroading that was rapidly disappearing. He made inquiries with RI&M, but the engine was priced just beyond his reach at $3,500.

In 1964, RI&M was closing down its scrap metal operation on St. Paul Blvd., and considered lowering their asking price for the engine to just $1,250. Virgilio was working as a custodian for the Rush-Henrietta school district at the time, and launched an intense fundraising effort to cover the cost of purchasing the engine. After signing a promisory note to cover the balance, DSI 5 was moved to Henrietta on June 17, 1965, thanks to H.L. Baughmann Equipment for donating a trailer and Gottry Carting Co. for donating a crane for the lift.

John Virgilio formed the Mortimer Railroad Historical Society, named after the junction of the NYC, Erie, and Lehigh Valley located behind his home in Henrietta. He named his operation the Mortimer & Red Creek Railroad, and received a donation of rail from LV in Buffalo to build a few hundred feet of track on his property. One of the barns was filled with railroad tools, signals, signs, and memorabilia. Virgilio’s private museum opened on June 11, 1966. 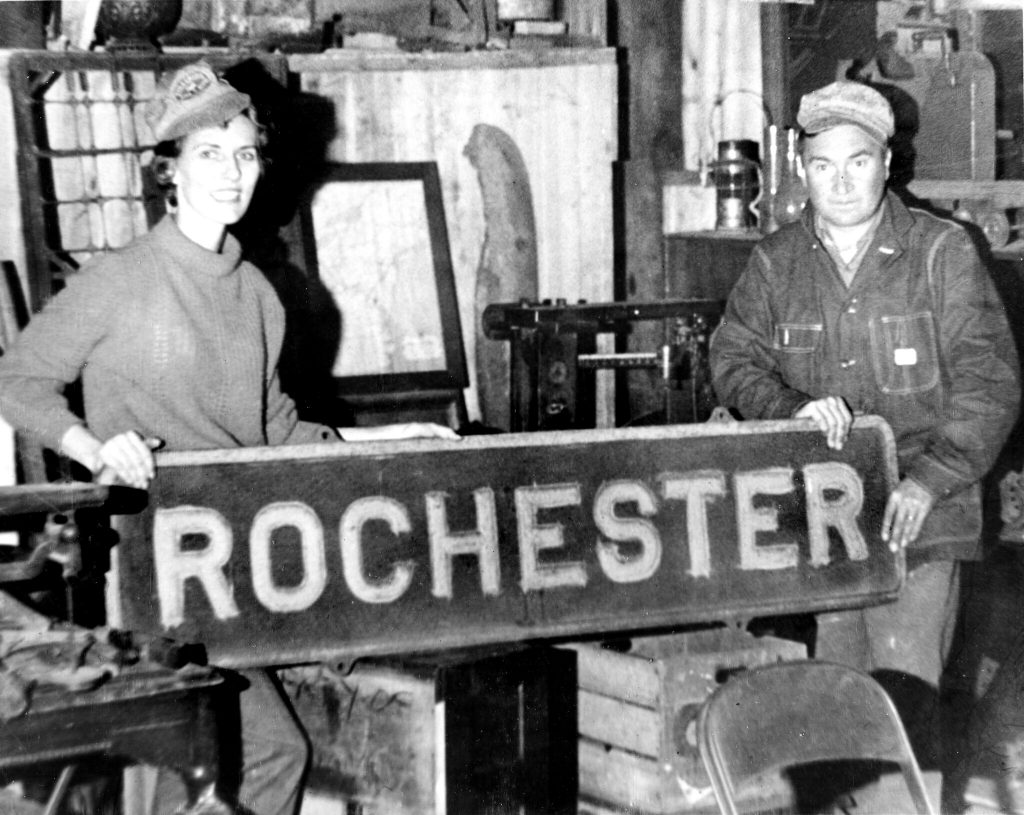 Over the years, may school groups came to tour the museum. Virgilio also had a hand-pump car that he would give schoolchildren rides on the short track in his front yard. Tour buses also came calling over the years, but after complaints from his neighbors and worry about the security of the collection, public viewing came to an end.  A shed was erected around the steam engine in 1972 to protect it from the weather and possible vandalism.

RGVRRM began cultivating a relationship with the Virgilio family in 2017, when family friend Bill Meister arranged a private tour of the engine and collection. This relationship continued through the years, and when John passed away in 2021 at age 91, his son Barry reached out to us about finding a possible home for his father’s legacy. After touring the collection again, and having Barry and his mother Phyllis tour our museum and facilities, it was agreed that we would be the new home for DSI 5. After some negotiation, an agreement for purchase of the locomotive and certain artifacts was reached in May 2022. 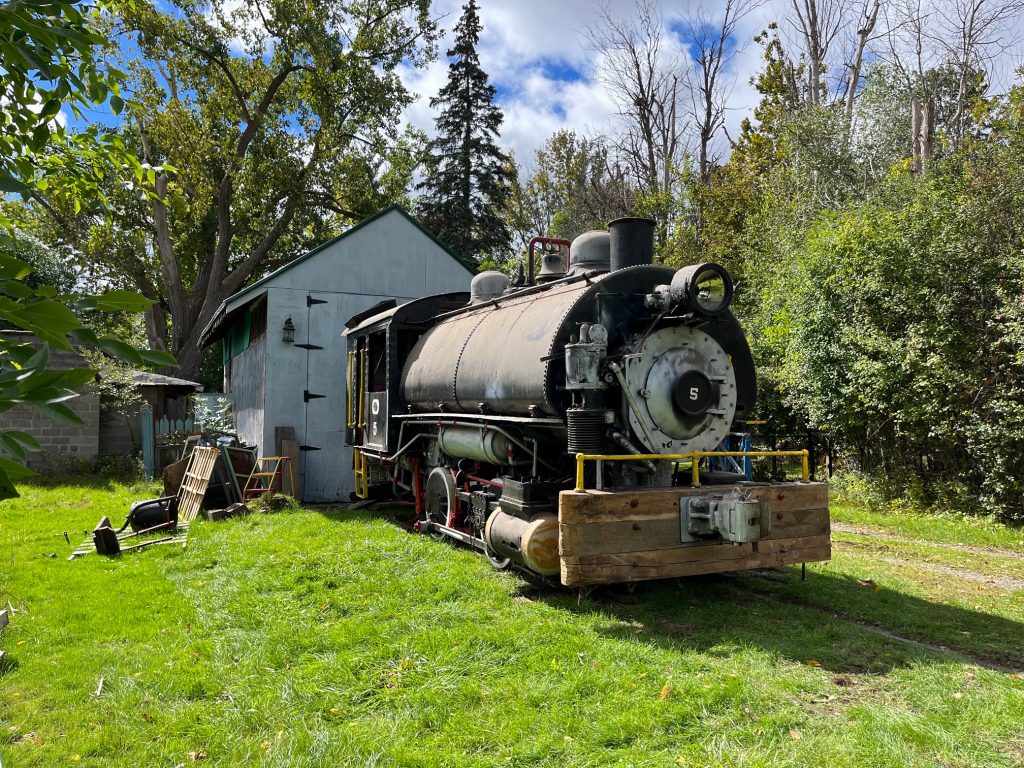 Once the locomotive arrives on our property, the first order of business will be to address the possibility of asbestos remediation. Our long-term plans include cosmetic restoration and putting the engine on display so visitors can walk through the cab. For now, your support is appreciated as we bring home another important piece of Rochester’s rich railroading heritage.