As the story goes, Mumford businessman Oliver Allen proposed the idea to build a railroad connecting Rochester with the coalfields of Pennsylvania. In 1869, the Rochester & State Line Railroad was chartered. Failing to meet its revenue goals, the company was reorganized in foreclosure as the Buffalo, Rochester & Pittsburgh Railway in 1885. Headquartered in Rochester, the railroad connected its three namesake cities with a Y-shaped system. In 1932, the railroad was acquired by the Baltimore & Ohio, along with the neighboring Buffalo & Susquehanna.

Caboose No. 280 was part of the third lot of this class built for the BR&P in October 1923 by Standard Steel Car in Butler, Pa. Standard Steel constructed No. 265 through the last in the class, No. 314, between September and December 1923. Prior to this, the prototype class car No. 150 was home built in the BR&P’s DuBois, Pa., shops in January 1914. The second group was built by the Mt. Vernon Car Company in Mt. Vernon, Ill., in April and May 1918. These cars were all steel underframe, center cupola cabooses. 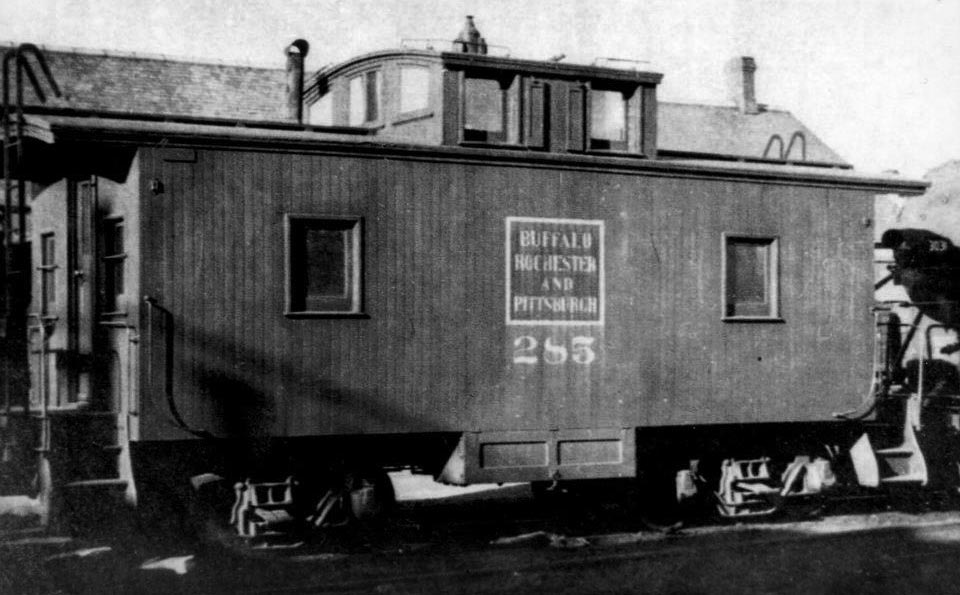 In 1961, the B&O began a modernization program of the I-10’s at the DuBois shops which included covering some of the side windows, modifying the toilet facilities, adding water tanks, replacing steps, changing stem handbrakes to Ajax type handbrakes, and modifying the cupola windows. Caboose C2631 arrived at DuBois for rebuilding in May 1961, and was released in October. 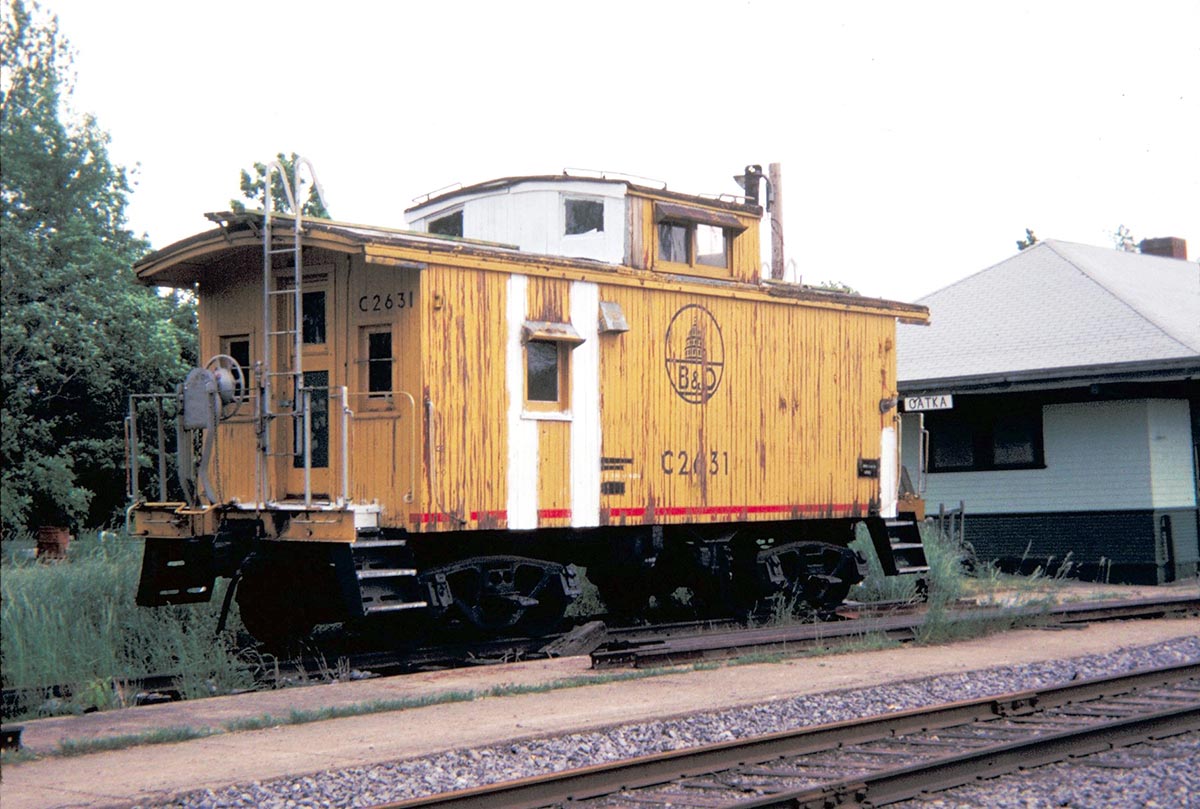 Caboose C2631 was retired in January 1974 and was stored at Salamanca, N.Y. Around the same time, our museum volunteers contacted Chessie System about a possible donation of an I-10 caboose. On March 5, 1974, we learned that railroad would donate B&O C2631 (BR&P 280). The car had been shipped from Salamanca to Chilicothe, Ohio, for dismantling, but was fortunately rescued in time. J.A. Lyons, Car Superintendent; G.A. Rockwell, General Car Foreman; H.F. Muir, Rochester Trainmaster; Dominic DiBacco all contributed to the effort to bring the car to Rochester. Glen Stover of Hornell and EL Freight Agent Greg Cheshire of Avon arranged to have the car moved from the B&O at LeRoy to the Livonia, Avon & Lakeville at Avon. The car was stored on the LA&L for five years. It would become the first piece of equipment to arrive at our Rochester & Genesee Valley Railroad Museum at Industry in 1979.

The car saw a major restoration in 1980 as B&O C2631, led by volunteer Curt Boyer. However, the outdoors is not kind to wooden cabooses, so the car was again in need of a major restoration and placed inside our Restoration Shop in 2000. The goal of the project is to backdate the car as much as possible to its late 1930s appearance as it operated on the BR&P.

Volunteer Chris Hauf led early efforts to backdate the car, applying new facing over the plywood cabinetry in 2003. New benches were constructed as well. Progress picked up again in 2012 with the installation of new closet doors and hardware. Unfortunately, a change of jobs led Chris clear across the country a few years ago. Charlie Marks has picked up where Chris left off, leading volunteers to complete repairs to the roof, exterior siding, framing out the cupola for new windows, and installing trim. Member Sam Ferrara donated a BR&P caboose stove to our project, which will be installed as part of the restoration. Volunteers Dave Luca, Dale Hartnett, John Redden, and Jeremy Tuke have also assisted in many tasks as well. 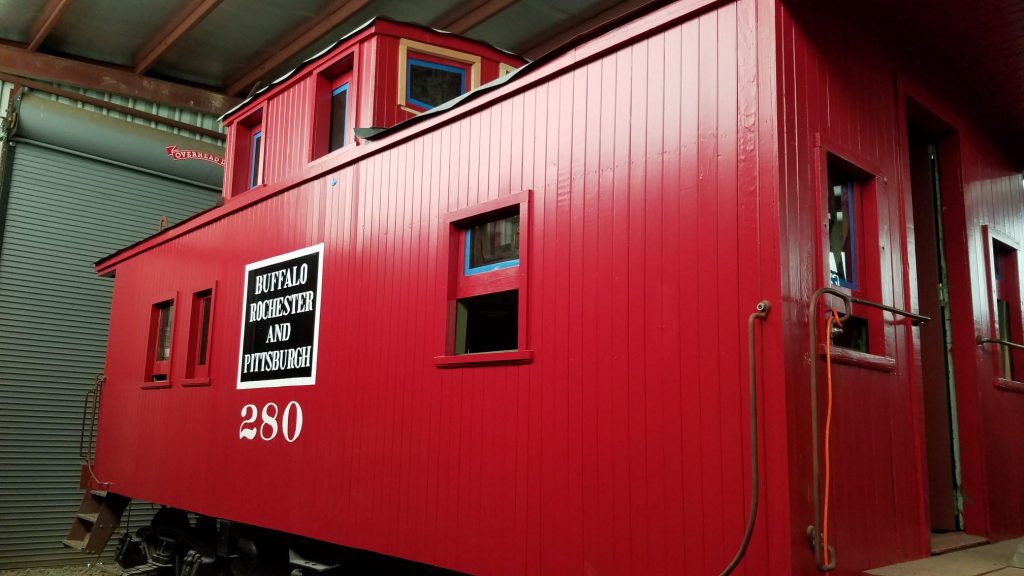 Currently, No. 280 has a fresh coat of exterior paint, and volunteers are working to complete the interior details and finishing. New windows were installed in 2018, and interior painting and finishing continues. A new rubber membrane roof was installed in 2019. On June 27, 2020, the restored BR&P 280 left the Restoration Shop for teh first time in 20 years to join our active fleet. We look forward to placing this caboose back in service on our museum railroad for our visitors to enjoy once again. Thanks to historian Brian DeVries for the service history of C2631.

The museum is seeking more information for the restoration of this caboose including drawings, photographs, etc. Please contact us if you might have something to contribute. All photographs will be returned. 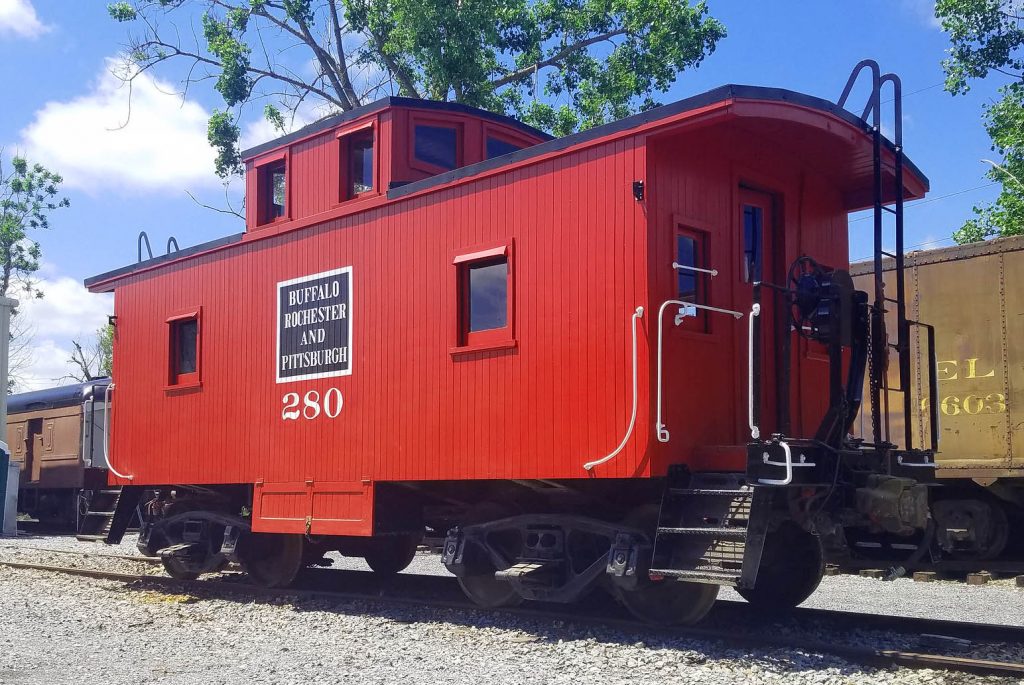 Buffalo, Rochester & Pittsburgh Railway caboose No. 280 was constructed by Standard Steel Car Co. in Butler, Pa., and released on October 31, 1923. In 1932 the railroad was acquired by the Baltimore & Ohio Railroad, and our caboose became part of B&O class I-10 and was renumbered as B&O C2631 in 1935.

In April 1951, B&O replaced the original K-type brake valves with more modern AB-valves. This was the first major modification since the car was built in 1923. Assigned to East Salamanca, N.Y., in 1951, it was briefly assigned to Clarion Jct. in 1953. Caboose C2631 returned to East Salamanca and was placed in the shop for repairs in November 1953. It was fully repainted in March 1954 and returned to service the following month. In 1955 the conductor’s emergency air brake valve was relocated up to the cupola position.

By November 1955, caboose C2631 was assigned to the 2nd Subdivision pool operating between Riker Yard in Punxsutawney, Pa., and East Salamanca, N.Y. Harold O. Jacobson was the assigned conductor. Our caboose received a fresh coat of paint at East Salamanca in 1956, with a large “B&O” replacing the spelled-out “BALTIMORE & OHIO” lettering. The car was painted again in January 1958 at East Salamanca, and the safety chains across the end rails were replaced with a welded bar that August. The car remained in the 2nd Subdivision pool, assigned to conductor John T. Sipko starting in 1958. Bernie L. Craft was briefly the assigned conductor in 1961. 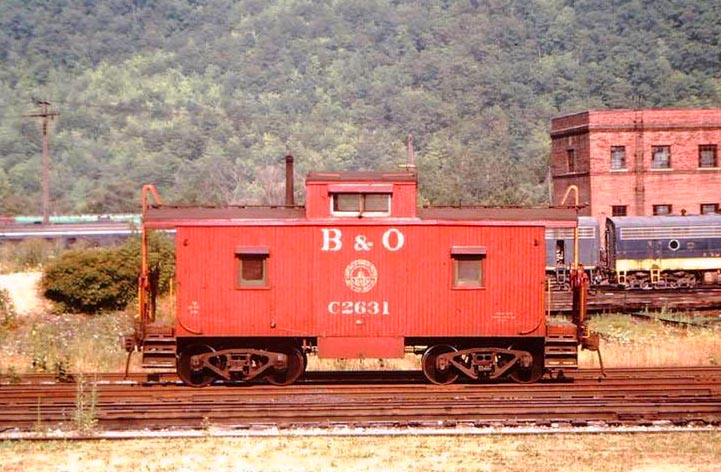 Our caboose was sent to the shops at DuBois, Pa., in May 1961 for upgrades and modernization. When the car was finally released in October, it emerged with updated cupola windows, a new water and toilet system, new steel vestibule steps, and Ajax-type geared brake wheels. Caboose C2631 returned to the 2nd Subdivision pool, assigned to conductor Joseph M. Lenda until October 1966.

Caboose C2631 made its first recorded trip to Rochester in 1970. It was a brief visit, as the car was sent to the shops in Chillicothe, Ohio, for repainting in January 1971. The car emerged with a yellow body, small B&O logo, and minimal lettering. It returned to our area with a brief visit to Silver Springs in October 1971 before being sent back to East Salamanca in August 1972.

In 1973, Chessie System was formed as a holding company to acquire the Chesapeake & Ohio, Baltimore & Ohio, and Western Maryland railroads. The end of the line came for C2631 in January 1974 when it was sent to Chillicothe and retired after more than fifty years of faithful service. Aware of the mass-retirement of Class I-10 cabooses, our museum made a written inquiry to the management of Chessie System inquiring about the possible acquisition of a former BR&P car. The response was in the affirmative and the car was delivered to Rochester by the end of the year. Briefly stored at the Livonia, Avon & Lakeville shops, the former BR&P No. 280 was placed on track at our museum in 1979.

Thanks to historian Brian DeVries for providing the detailed service history of this historic car.