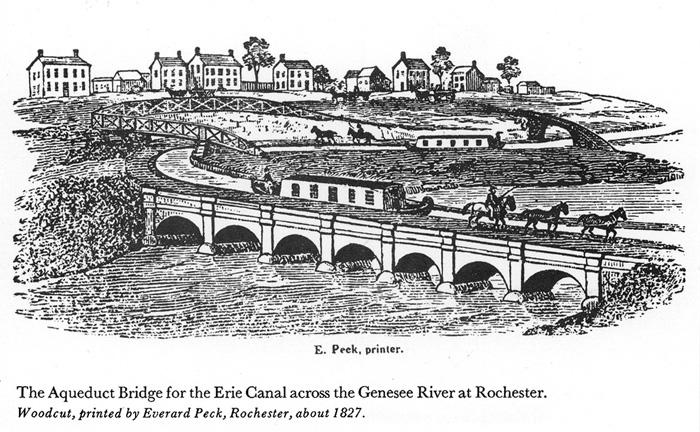 The city of Rochester, New York, sits astride the Genesee River, with the mighty High Falls providing a dramatic punctuation to the downtown landscape. Drawn to the abundant natural power of the falls, a grist mill and a saw mill were constructed there as early as 1789. However, the location was so isolated in the wilderness, there was little demand for their services. The mills lay dormant until a wealthy landowner by the name of Col. Nathaniel Rochester arrived from Hagerstown, Maryland, with his business partners Col. William Fitzhugh and Maj. Charles Caroll in 1800. Seeing the area firsthand, they quickly acquired wide tracts of land along the Genesee River, recognizing the great potential for future settlement.

By 1811, Col. Rochester began the process of laying out a town around the Upper Falls tract. The War of 1812 drove many settlers seeking greater security inland as a result of the enemy attacks on the shores of Lake Ontario. The fledgling town of “Rochesterville” benefitted from this influx of new settlers, and continued to grow throughout the decade. Col. Rochester helped lead this growth, relocating his family to the city he named after himself. By 1821, Rochesterville had been named the seat of the newly formed Monroe County. Population had reached 2,500 by 1823, the same year the name was changed to simply “Rochester.”

The city continued to enjoy prosperous growth as an industrial center, soon earning the nickname “Flour City” for the numerous mills taking advantage of the natural power source provided by the Genesee River waterfalls. The town leaders had earlier petitioned the state to favor a more northern course for the proposed Erie Canal, and this proved to be a wise decision. The canal provided the first mass transportation to the area, moving more than 3,600 tons of flour in just the first ten days of its operation. The population of Rochester skyrocketed to 9,200 by 1830, making it the 25th largest city in America. A decade later, the population would more than double to 20,191.

By 1850, Rochester had climbed the ranks to 21st largest city in America with a population of 36,003. By this time, westward expansion had pushed towards the Great Plains, and with it, the emphasis on farming. The “Flour City” soon transformed into the “Flower City” thanks to the growth of Rochester’s many nurseries and seed companies, though it remained an important industrial and manufacturing center.

While the Erie Canal had opened up a large part of the region to commerce, personal travel was still a bit of a challenge. As early as 1825, a stagecoach line opened through the Genesee Valley between Owego, Bath, and Rochester. Stagecoaches ran daily taking two days to traverse the route. These routes were operated by Magee & Co., founded by Bath resident John Magee. These primitive lines also carried the mails, which were awarded through highly sought after government contracts. (CT) After serving two terms in Congress, Magee was instrumental in forming the Steuben County Bank in 1832. One of the directors of the bank was Constant Cook, “The Frontier Horse King” of Cohocton. Cook worked with Magee on a number of projects, including expansion of his stagecoach business.

A number of competing stagecoach lines emerged during the 1830s and 1840s. One line went from Geneva to Dansville and, in 1847, took nine and a half hours and cost two dollars(B). Another line went from Canandaigua to Bath. The two lines intersected at present day Cohocton where passengers could transfer. Another line went from Dansville through Conesus and Livonia Center to the Yellow Wasp Tavern west of Lima where connections could be made with stages from Canandaigua to Buffalo and Niagara Falls. By 1850, upstate New York had a rather intricate network of stagecoach lines connecting Rochester with towns throughout the Genesee Valley.

When one thinks of stagecoaches, one is apt to envision them as pictured in Western movies, romantically kicking up dust along well-groomed prairie trails. Most upstate New York stagecoaches did not fit that mold. The roads were primitive and quite bumpy. If these trips were of any length, they could become tests of endurance. By 1850, the star of the stagecoach had already begun to set with the ascendancy of canal boats. Though not much faster, they offered a considerable upgrade in comfort with the advent of the packet boats. However, there were few canals and the stagecoaches still had considerable business making connections with them. The final blow was dealt by the railroads that had considerable advantage in speed and were much easier and cheaper to construct than canals. This reduced the stagecoaches to local pickup service, much of it connecting with trains, a role they maintained until the advent of the internal combustion engine.

Early Rochester settlers made use of every appropriate body of water for transportation. The Genesee River was navigable from Rochester to Geneseo with steamboats being able to travel as far south as Avon. The Conhocton River was also used for navigation. “Navigable” in many cases meant small flat boats but they were still better than hauling goods and people over what passed for roads in those days. If a stream was navigable, it took little preparation to ready it for use other than dock facilities. For this reason, any trickle of water that could be floated was put to work in western New York.

Early use was also made of the lakes throughout the region. Of the eleven Finger Lakes, nearly all of them had commercial shipping at one time or another. Seneca Lake, in particular, was part of a number of transportation routes. At 38 miles in length, it allowed relatively cheap shipping for quite a distance without transloading. Keuka Lake was another, with shipments terminating at Hammondsport, then horse-drawn to Bath, loaded on to rafts for a trip down the Conhocton River. With transfer to larger vessels, shipments could make their way down the Susquehanna River all the way to Chesapeake Bay.

Of course, the problem with using lakes and rivers for transportation was that they rarely went from the Point A to Point B desired by the shipper and traveler. If there was enough demand for a particular route, the early solution would be to build a canal, usually at great expense.

The ambitious Erie Canal was completed between the Hudson River and Lake Erie in 1825. It was an immediate success and transformed the entire region it served. Passengers could make the entire trip end-to-end in four days. Of even more importance was its ability to handle vast amounts of freight which did much to develop agriculture in upstate New York.

A network of canals was developed across the state in the 1830s. Among these was the Chemung Canal, opened in 1833(E), which ran from Elmira to what would become Watkins Glen on Seneca Lake. There, steamboats could haul cargo or passengers to Geneva where they would then be transferred to canal boats on the Seneca and Cayuga Canal which had been constructed five years before. From there they would travel up to a connection with the Erie Canal. The Chemung Canal also had a branch from Elmira to Corning in Steuben County. That same year, the Crooked Lake Canal was opened which connected Keuka Lake at Penn Yan with Seneca Lake at Dresden and opened October 10, 1833(D). This gave Keuka Lake a connection to the Erie Canal system as well.

The other western New York enterprise was the Genesee Valley Canal (D). This was a much larger endeavor, eventually stretching 121 miles from Rochester to Olean. It was started in 1837 and by 1840 was opened as far as Mt. Morris. The following year it reached Dansville as a branch from present day Sonyea to Dansville. It took another ten years to get from Sonyea up into Allegany County, much of it having to do with problems along the banks of the Genesee River within the latter’s gorge, and tremendous climbs in elevation. Olean was reached in 1856 and a connection with the Allegany River was established in 1861.

These canals had numerous problems that differentiated them from the successful Erie Canal. First and foremost was the terrain through which they went. The Erie Canal, for the most part, went through level country and required relatively few locks. These other canals went through hilly country requiring the construction and maintenance of costly locks. These factors hurt the ability of the smaller canals to charge competitive rates against both the Erie Canal and the railroads. While the Erie Canal generated a large amount of traffic and could offer shippers cheaper rates than the railroads, the other canals went through less productive areas. None of the side canals was built as well as the Erie was in its eventual three incarnations, so their cutrate locks suffered with every spring flood. One major factor hurting all canals was that they could not operate in the winter.

The Chemung and Genesee Valley canals had a resurgence of traffic during the Civil War but after that they both went into steady decline. The State of New York, the eventual owner of both, ordered them, along with the Chenango Canal, closed in 1878. The Crooked Lake Canal had closed the year before, leaving the Erie Canal and its branches as the only viable water options.

The first railroads followed natural transportation routes and connected cities. There were several connecting lines reaching across New York State from the Hudson River to Buffalo by 1850. The Mohawk & Hudson Railroad was the state’s first, with construction starting in 1826 and opening in 1831. In 1853, ten railroads were combined to form the New York Central, and established through service from Albany to Buffalo. With these improvements and consolidations, the total time required for their fastest passenger train was about fifteen hours. This was the death knell for the stagecoach lines which required four days between the same two points. The canals also lost whatever remaining passenger business there was to the railroads although they could still compete for some kinds of freight.

Down in Steuben County a pioneering railroad route from Corning, N.Y.m to Blossburg, Pa., opened in 1840 (J). The purpose of the Corning & Blossburg Railroad was to bring coal out of the mines around Blossburg. John Magee, Constant Cook, and his cousin were among the incorporators of the Blossburg Coal Company. In 1851 Magee purchased a controlling interest in the C&B railroad(OB). At the time of its construction, the railroad was completely isolated. In an ironic twist, all rails and spikes as well as locomotives and rolling stock had to be shipped by canal to reach the railroad. John Magee died in 1868, but control of the railroad remained in the family. The railroad continued to grow through a series of leases and acquisitions, eventually forming the Fall Brook Railway in 1892. The entire system was leased to the New York Central in 1899, offering valuable access to the rich coal fields of central Pennsylvania.

Steuben County almost had a second railroad about the same time. A group of businessmen organized the Conhocton Valley Railroad in 1840. The exact route is not known but presumably it was to run from a point in the valley down to Corning where it, too, could connect with either the Chemung Canal or the Chemung and Susequehanna Rivers. This would allow heavier and more predictable transportation down the Conhocton valley than was currently being offered by the small flat boats using the river. The route was surveyed but the project got no farther (PY).

Steuben County got its second railroad in 1850 when the New York & Erie Rail Road had been completed from the Hudson River port of Piermont all the way toHornellsville.  John Magee was one of the incorporators of the line as early as 1832. He realized the importance railroads would have to the economy of the region and pushed for construction to be completed west towards the Genesee Valley. By 1851, the New York & Erie would be completed through to a new port at Dunkirk, creating the first all-rail route between New York City and Lake Erie. The stage was now set.