Lehigh Valley No. 211 was originally built by Alco for the Pennsylvania Railroad in December 1953 and was delivered as PRR 8445. It is unique in that it has a raised short hood used to house the dynamic brakes and a steam generator for heating passenger cars. For obvious reasons it soon got the nickname “Hammerhead.” It is the only survivor of a group of five RS-3s built with a high short hood for PRR and Western Maryland Railway, and one of only a handful of surviving Conrail rebuilds where the Alco prime mover was replaced with an EMD.

This unit is one of five RS-3s equipped with both dynamic brakes and a steam generator. PRR 8445 was built especially for helper service between Emporium and Keating Summit, Pa., on the Harrisburg-Buffalo line. The steam generator was installed to permit the 8445 to protect the passenger schedules on the line between Emporium and Erie in the event of a failure by the normally-assigned E8s. 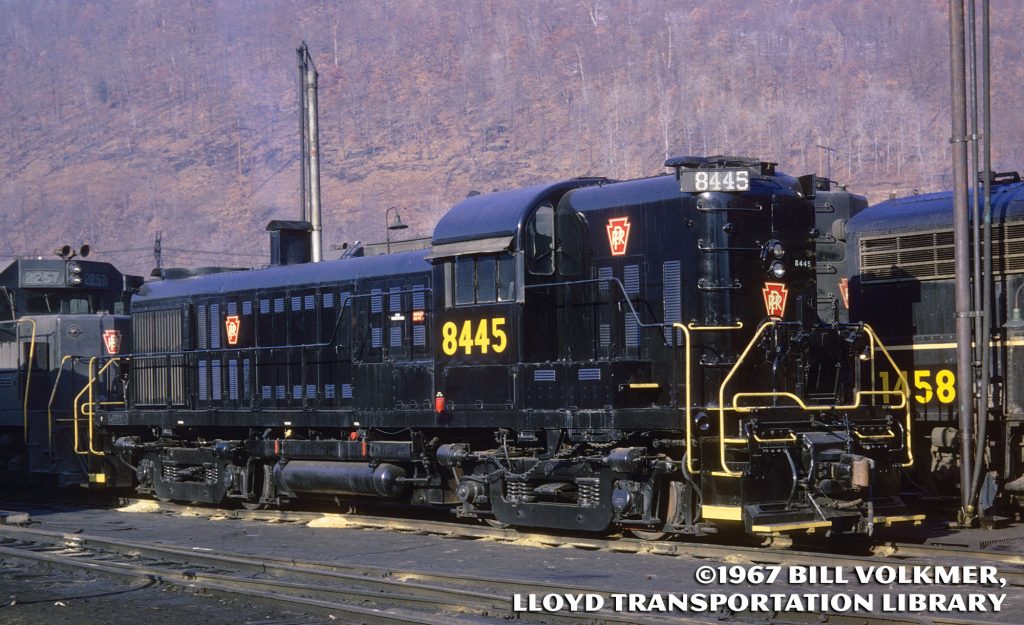 The unit was renumbered in 1966 to PRR 5569 and conveyed in the Penn Central merger in 1968 and became PC 5569. As the unit was to be traded into General Electric in 1970 it was exchanged with the PC controlled Lehigh Valley for an older RS-2 211 which was then traded into GE in the Hammer Heads place. It was then painted with Lehigh Valley colors and numbered 211. This unit spent time in western New York being used in yard and local service in and around Buffalo. Occasionally the unit took a local east out of Buffalo on the main and ventured within a mile of our museum on the LV main to the south of us, working local trains in Lima and Manchester. After its short stay in western New York the unit was transferred to the Bethlehem, Pa., engine terminal and saw service on the coal branches and serviced the steel mills in the Allentown area. 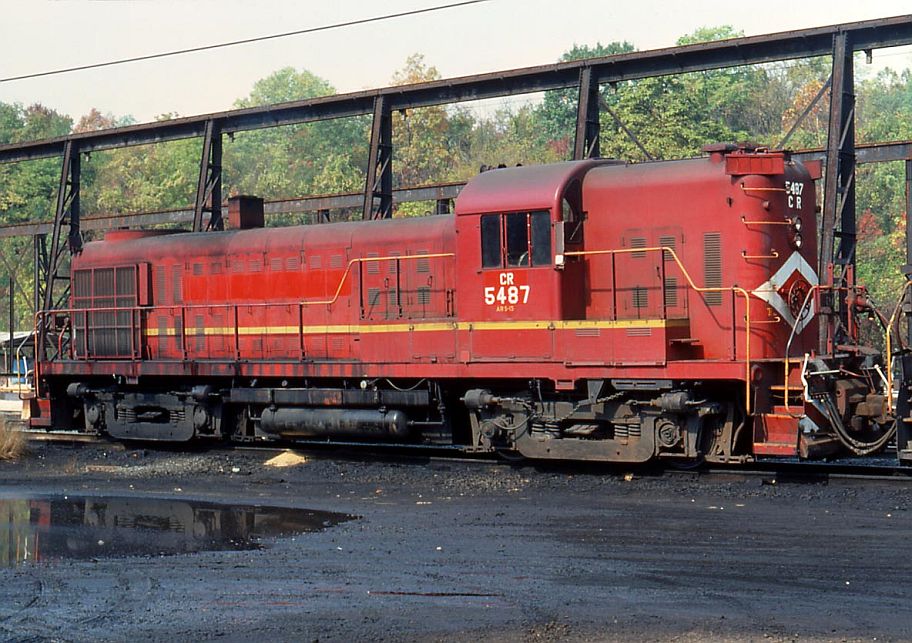 With the onset of Conrail the unit was renumbered CR 5487, used for a while, then set aside. In 1979 Conrail was in its final stages of rebuilding RS3’s into “DeWitt Geeps,” so named because PC started rebuilding RS’s in their DeWitt shops in Syracuse, New York.

This unit was selected as one of the last to be rebuilt in August 1979 and consequently it had all of the bugs worked out of the hybrid matching of General Motors (EMD) components to an ALCO shell. Its prime mover was removed from a scrapped ex-Erie Lackawanna EMD E-8, rebuilt as all other major components were, fitted with an EMD control stand and electrical cabinet which eliminated problems encountered with earlier DeWitt rebuilds, and then sent on its way. With a raised long hood customized to give the unit its as delivered appearance, mind the dual EMD exhaust stacks, the unit emerged from Conrail’s Juniata Shops with its 12 cylinder 567 engine and was repainted in its Conrail blue and renumbered 9920. 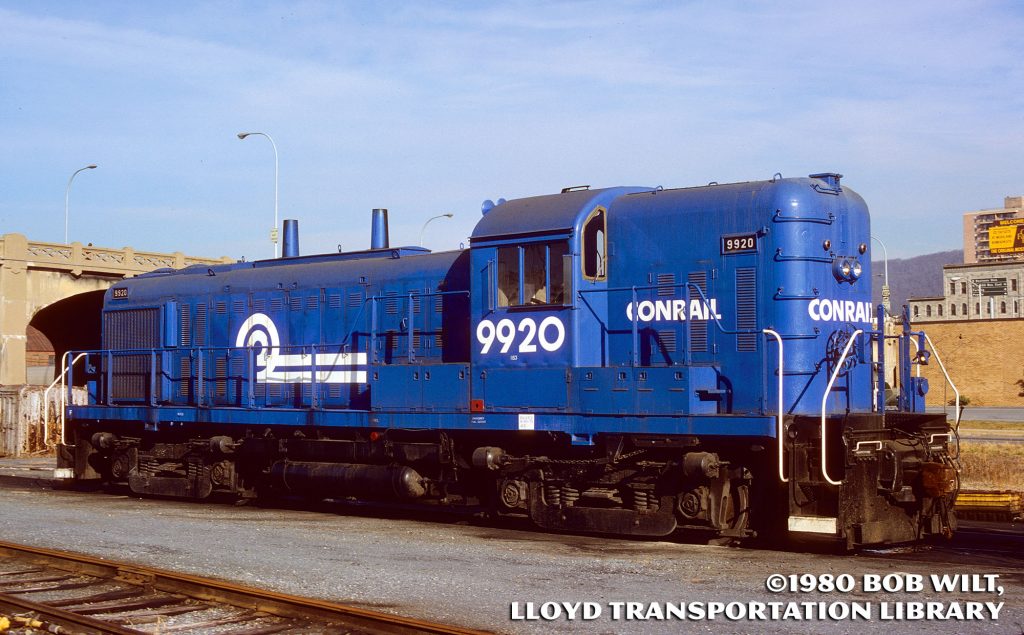 The unit was again assigned to the Allentown steel mills and saw only 20 months of service before being stored by Conrail in April 1981. Along with its sister 9900 rebuilds it sat at Altoona until August 1986. Local associate Doug Eisele noted that at the time, no other organizations had saved a Lehigh Valley diesel, and that Conrail 9920 was a great candidate for preservation. Negotiations were entered into with Conrail and a reduced purchase price was “hammered” out. A group of Rochester & Genesee Valley Railroad Museum members banded together to form “LV 211 Associates” and purchased the unit from Conrail. At this time Conrail was in the process of either selling or scrapping this series of units. The unit arrived at our museum in August of 1986 and was cleaned and partially repainted Conrail blue for the time being.

As the January 1980 Railfan & Railroad magazine stated, “Conrail’s RS3m 9920 is like the proverbial cat with nine lives.” It now has survived a third retirement and an near scrapping by Conrail in April 1986. Through the efforts of the David MonteVerde (who at that time was our Superintendent of Motive Power and Rolling Stock), LV211 was saved from scrap and brought back to western New York. In addition to its third retirement, it has survived two bankruptcies (PC and LV), four former owners (PRR, PC, LV, CR), and now is seeing service on its fifth road. On October 1, 1986, the unit was leased to the new Rochester & Southern Railroad and worked there for approximately one year and then returned to the museum.

The locomotive was primed and re-painted during the summer of 1990 to match its paint scheme that the Lehigh Valley Railroad used during the early 1970s. The unit is fully operational and is a part of our museum’s regular train operations. We look forward to pairing LV 211 with our LV boxcar 62300 and LV caboose 95100 in the near future!