The Rochester & Genesee Valley Railroad Museum is pleased to offer the video, The Vanishing American, available for sale in two different formats: Standard definition DVDs and full 1080 HD Bluray discs.    All proceeds from this sale go to benefit the ongoing restoration projects at the museum including the restoration of Buffalo, Rochester & Pittsburgh Railroad caboose #280.

Prices include free shipping!
NOTE: We will make every effort to get your video to you before Christmas, but we can not guarantee holiday delivery after Wednesday, December 19th.

Just over sixty years ago, the members of the Kodak Camera Club of the Eastman Kodak Company in Rochester, New York decided that the soon to disappear rail passenger service on the Baltimore & Ohio Railroad (nee Buffalo, Rochester & Pittsburgh Railroad) from Rochester to Pittsburgh, Pennsylvania would be a subject to record in color on Kodachrome motion picture film in order to preserve the images of that rail operation for posterity.  Filmed around 1951 based on the motive power used, the regularly scheduled operation would cease in 1954 although there were NRHS excursions with steam and diesel power from both Rochester and Buffalo to Clearfield and other points.
The images were recorded on 16mm film and were edited to form the Vanishing American.  A separate magnetic sound track was recorded and converted to an optical sound track on the Ektachrome release prints made from the original edited Kodachrome 16mm master.  The Kodachrome master survives today in near perfect condition having been donated to the R&GVRRM by Kodak over a decade ago, but the Ektachrome release prints have faded markedly.   The Rochester & Genesee Valley Railroad recently partnered with Kodak to digitize at 1080p resolution the Kodachrome master film while the R&GVRRM transferred and re-mastered the soundtrack from the best of several of the Ektachrome prints which were used to make the recent DVD and Bluray releases of the Vanishing American for sale here.
We hope that you’ll enjoy this visit to the past as we travel from the Lincoln Park engine terminal to the west side of Rochester and the old Buffalo, Rochester & Pittsburgh passenger depot for the departure of the train south to Machias Junction and Pittsburgh.   The high-wheeled B&O Pacific will pull the train through the countryside south of Rochester to Salamanca, and we are along for the ride.

***Interested in carrying the Vanishing American at your railroad museum or store?   Please contact us here, and we can provide our wholesale information.

Local historian and museum member Donovan Shilling will be presenting the evening program at our monthly membership meeting, titled “35 Golden Years at Ontario Beach Park.” Don will outline the history of Rochester’s lakeside amusement park, also including Sea Breeze, Glen Haven, and others. Rochester once had many amusement parks served by trolley and by rail, and Don’s presentation features many rare never-before-published photographs. 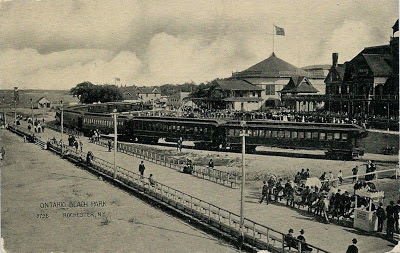