For many years, the Rochester & Genesee Valley Railroad Museum has held volunteer work sessions on Tuesdays along with Saturdays. Originally held only on Tuesday evenings, the work sessions now last from the morning all the way into the evening with some crews working during the day and others coming in the evening after work.

Tuesday, March 24, 2009 was no different than any other Tuesday although the volunteers were starting to take advantage of some of the nicer Spring weather. With some grading to take care of near Switch #6 where the lead to the museum’s restoration building yard diverges from the main, the volunteers had the museum’s Huber-Warco grader working along with the museum’s Case backhoe. As the grading was taking place, the museum’s new GE 110-tonner was building air in preparation for a test run later in the evening. The 110-tonner had been delivered to the museum a few months earlier and stored on the museum’s new siding west of the Livonia, Avon & Lakeville tracks. It had only been moved over to the museum’s railroad the weekend before after the museum’s Industry yard lead was temporarily rebuilt. So please check out a few more pictures and a video of the evening’s work.

We are always welcoming new people to come and join us to help volunteer around the museum so please stop on out some Tuesday or on a Saturday when we also volunteer. Photos by Chris Hauf 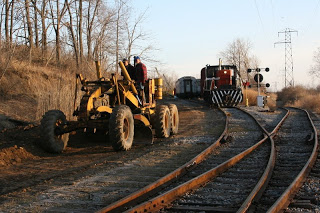 Museum volunteers Mike Dow and Dan Waterstraat work aboard the grader. A lot of learning at the museum is hands on and Mike was getting to learn a little about how to run the Huber. 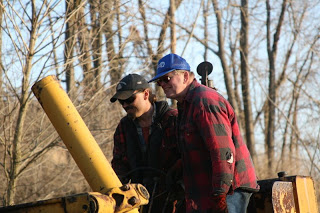 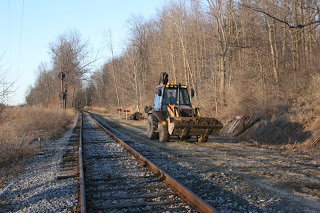 The museum’s Case backhoe scoops up extra dirt left after a pass from the grader. 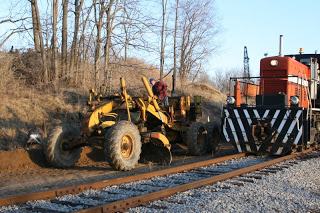 Dan starts another pass with the Huber as R&GV #8 builds up air. 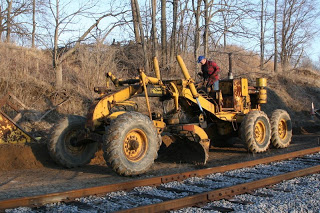 The Huber is the largest of the museum’s 3 operable road graders.