Back in August, the R&GVRRM’s Jackson tamper’s engine suffered a crankshaft failure.   Since then, the engine has been removed and has been undergoing rebuilding by one of the museum’s volunteers, Bob Ziegler.   Given the engine is less than new and somewhat unique as a two cylinder Detroit Diesel, parts have been been a little more challenging to find, but Bob did a great job locating a new crank and all the necessary gaskets needed.   At this point, the engine is back together with just the auxiliaries to be bolted on.    Here are some recent pics of the work on the engine. 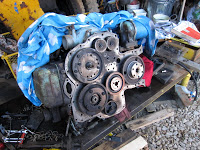 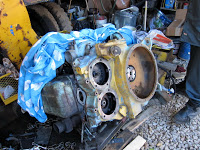 The Detroit Diesel engine for the museum’s Jackson tamper sits in the shop and is under reassembly after replacement of its broken crank shaft. Here the gear train is exposed (left) and with the cover reinstalled (right). 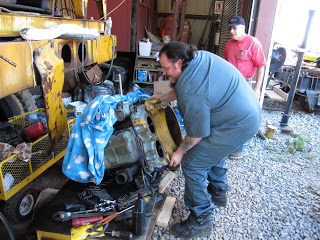 Museum volunteer, Bob Ziegler, fits the cover over the gear train as the engine continues to be put back together. Bob has done all of the repairs to the engine including finding the right parts needed to do the job.