The Rochester & Genesee Valley Railroad Museum in suburban Rochester, N.Y., marks their 80th anniversary in 2017 with a special visit from a traveling steam locomotive as the highlight of their year-long celebrations. On February 4, 1937, ten railroad enthusiasts met on the second floor of the New York Central train station on Central Avenue to found the organization that would grow to become the largest collection of historic trains in New York State. The museum found their permanent home in 1971 when they purchased Industry Depot in Rush, N.Y., from the Erie Lackawanna Railroad, and restored it to its 1930s appearance. The first train rides were offered in 1993 on a mile of track constructed by museum volunteers using materials salvaged from nearby abandoned railroad lines. 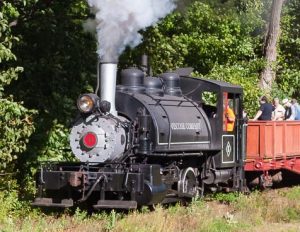 Today, the museum rosters more than 40 pieces of equipment, including 14 passenger cars, 14 freight cars and cabooses, 10 diesel locomotives, and two steam engines. While the two engines in the museum’s collection are years away from operation, the museum’s dreams of steam are about to come true. On August 19-20 and 26-27, the museum will host Viscose Co. No. 6, built by Baldwin in 1924 for the American Viscose Co., Roanoke, Virginia. It was retired in the 1960s and moved to a scrap yard. A private individual purchased the locomotive in 2004 and restored it to operation in 2007. Based in Dunkirk, N.Y., the 0-4-0 tank engine makes several appearances at tourist railroads and festivals around the country each year. This will mark not only the engine’s first visit to R&GVRRM, but also the first time a steam locomotive has operated in Rochester since 1954.

“Having an operating steam engine has always been a goal of our museum,” said president Mike Dow, “With Viscose 6 visiting this summer, it finally becomes a reality.” Museum volunteers are hard at work constructing a special open-air rider car so that visitors will be able to fully experience the unique sights and sounds of steam railroading. 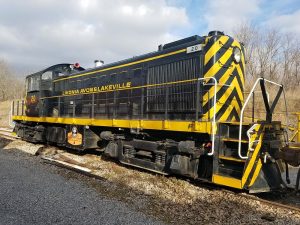 The museum enjoyed record-breaking attendance last year, capped off by the donation of Alco RS-1 No. 20 by Livonia, Avon & Lakeville Railroad, operators of the line that runs past Industry Depot. Originally built for the Lake Erie, Franklin & Clarion in 1949, it was purchased by LA&L in 1972 and became the first Alco diesel in their fleet. Tonnage and traffic outgrew the RS-1, and it was stored in 2008. In 2016, the decision was made to donate the vintage Alco to the museum, arriving at Industry at the end of November. Volunteers plan to make this latest acquisition the star of their annual Diesel Days event this September.

“With five major railroad companies serving Rochester at one time, those ten men in 1937 realized the important part the industry played on the development of our community,” Dow said, “Eighty years later, our volunteers are carrying on their original mission and growing. We intend to be here another eighty years, and then some.”

While steam is the highlight of this year’s schedule, the museum season will begin with special Easter Bunny Train Rides on April 15. Local breweries will partner with the museum to present Rails and Ales on May 20. Visitors will see the progress to restore Rochester Subway Car 60 during Subway Heritage Weekend on June 17-18. The museum will host a show featuring local artists as part of the Craft Show Train Rides in July. Steam train rides will be offered two weekends only on August 19-20 and August 26-27. Diesel Days in September will showcase the museum’s operating fleet of vintage diesel locomotives, including LA&L No. 20. Our popular Pumpkin Patch Train Rides return for three weekends in October, followed by Santa Trains in December. Also, don’t miss our annual Fall Foliage Express on Saturday, October 7! Visit our web site for details.