Just about everyone in Rochester has made the visit to Nick Tahou Texas Hots on West Main Street, home of the original “Garbage Plate” made famous by the late-night crowd looking for a large, inexpensive, and tasty meal. The current location at 320 West Main Street is the old Buffalo, Rochester & Pittsburgh Railway terminal, which became part of the Baltimore & Ohio system in 1932. Not many people know the important connection and long history between the railroad and the Tahou family. 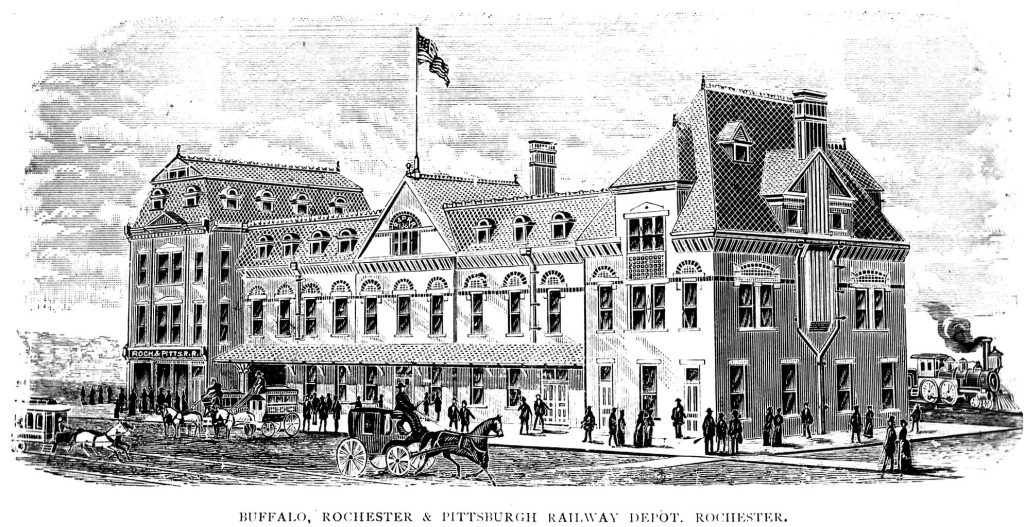 The oldest portion of the building is the western section, which was built in 1877 as the offices for the Pitkin Building and Monumental Steam Stone Works (not a hotel as many sources state). It was acquired by the railroad in 1881 and expanded to its present size, becoming a passenger terminal and offices. The new station replaced an earlier temporary station on the corner of Maple Street and Saxton Street that was built by predecessor Rochester & State Line Railroad in 1874 (Thanks to Todd Blide for the research and information).

The Tahou family came to America from Flambouron, Greece. Alex Tahou got his start selling hot dogs out of a cart to hungry passengers at the BR&P station before he opened his lunch counter at nearby 296 West Main Street in 1918, naming the restaurant after his son, Nicolaos (“Nick”). In the photo above from the collection of Todd Blide, a window proclaiming “Texas Weiners” can be plainly seen in the foreground. 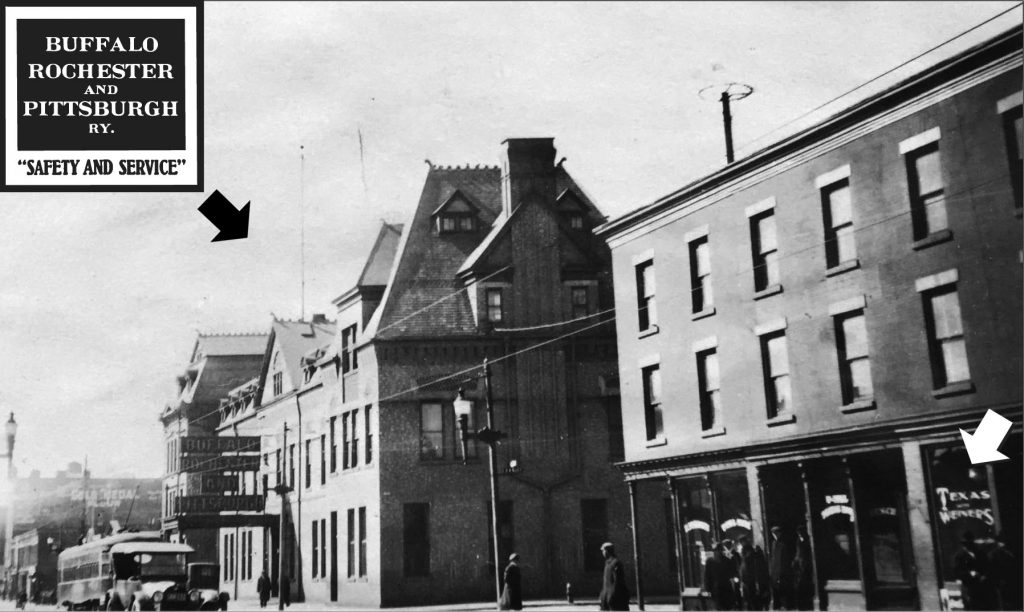 This 1918 photo shows the Buffalo, Rochester & Pittsburgh station at 320 West Main Street (black arrow), current home of Nick Tahou Hots. The commercial block in the foreground is home to the original Tahou’s (the white arrow pointing to “Texas Weiners” in the window), founded in 1918 by Alex Tahou and located at 296 West Main Street. Todd Blide collection

In the depths of the Great Depression, hungry patrons flocked to Tahou’s for “hots n’ potats” a meal which consisted of hot dogs, baked beans, and home fries. The restaurant was able to serve large portions of the inexpensive foods, making the location quite popular for years to come. His son Nick Tahou arrived in America in 1937 and took over the family business in 1942. 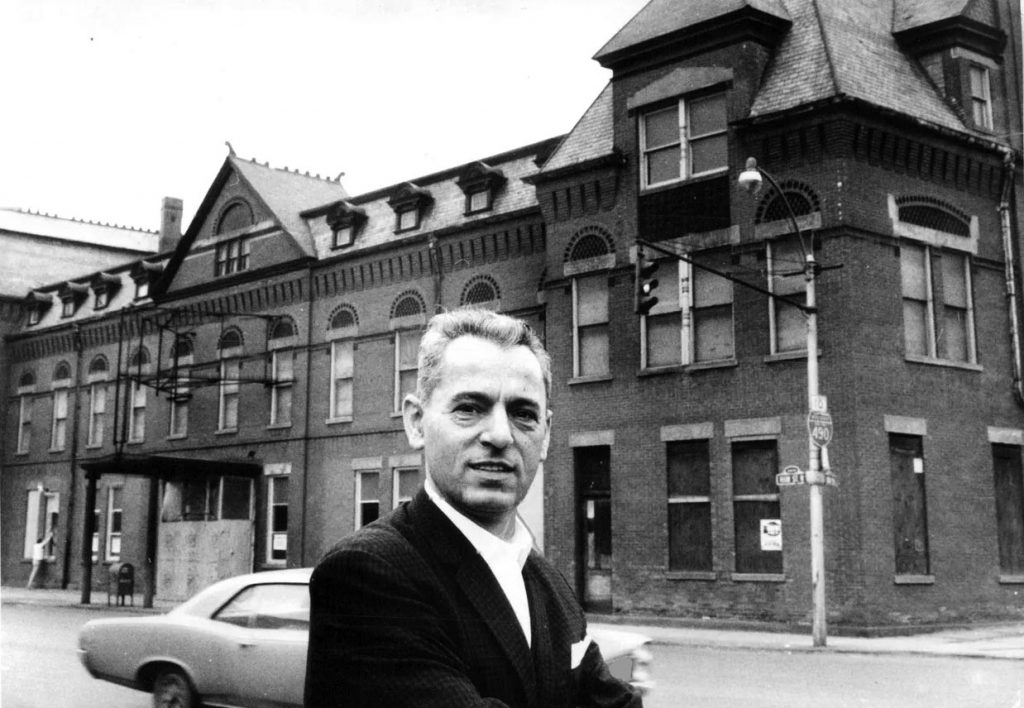 Nick Tahou stands in front of the old B&O/BR&P station in 1967 as the building is being renovated to be the new home of Nick Tahou Hots. Democrat & Chronicle file photo

After the end of B&O passenger service to Rochester in September 1953, and not needing the additional office space, the railroad put the station up for sale. It was purchased by Peter D’Ambrosio of Brighton in the spring of 1962. Construction began on the Western Expressway (today’s I-490) from Mount Read Boulevard toward Chili and Churchville in 1962. Understanding the state’s long-term plans included connecting the expressway to the existing Inner Loop downtown, Alex Tahou knew his busy restaurant was in the path. He purchased the B&O station from D’Ambrosio in September 1963 for $43,000. The move down the block would not take place until the original location was demolished in 1968. Today, a relocated Broad Street runs through the location of the original Tahou’s restaurant. Nicolaos “Nick” Tahou passed away in 1997, and his son Alex Tahou continues to operate the restaurant to this day, though no longer operating 24/7. 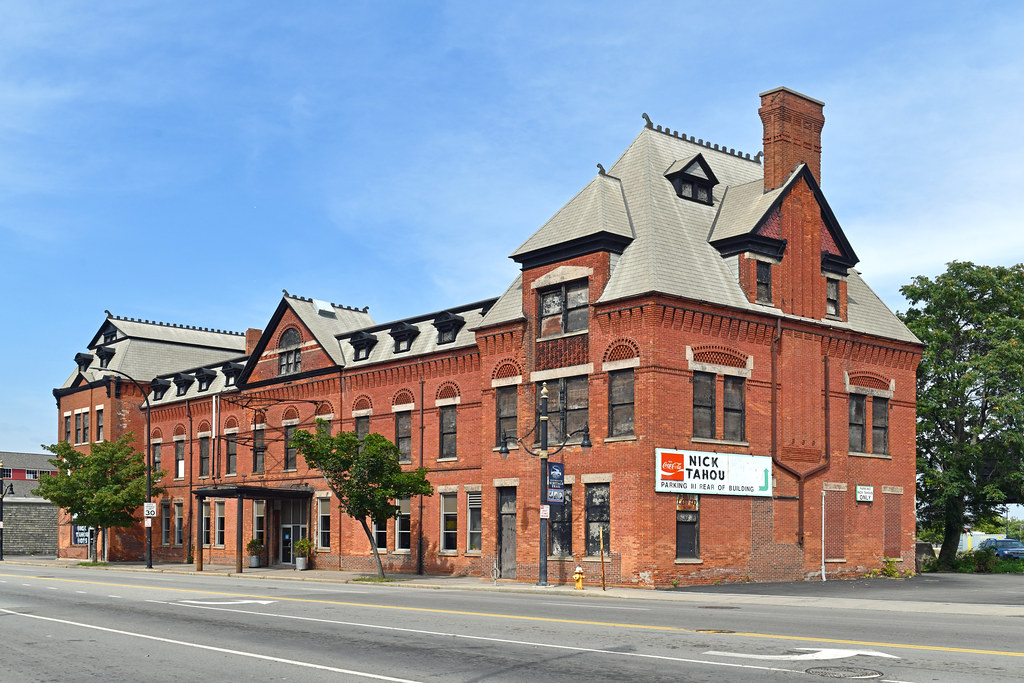 Nick Tahou Hots as seen in 2012. A remnant of Oak Street forms another access to the rear parking lot.

After the end of passenger service, the tracks behind the station remained active for freight, used by local crews to access the sidings for the B&O freight house and Morse Lumber Co. While the freight house was torn down in the 1970s, Morse Lumber remained a steady customer. Rochester & Southern took over freight service in 1986. In 2019, the old platform areas were fenced off as Morse Lumber had acquired the property to use as storage space for their expanding business. In March 2021, Alex Tahou announced both the building and the business were for sale.