From the archives… Merry Christmas from ALCO-GE News 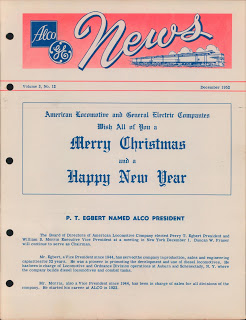 For the holidays, we jump back into the Rochester & Genesee Valley Railroad Museum’s archives where we find the December 1952 edition of ALCO-GE News from the American Locomotive Company and General Electric Company.   This monthly newsletter appears to have been sent to ALCO customers to keep them up to date on different things related to ALCO products. 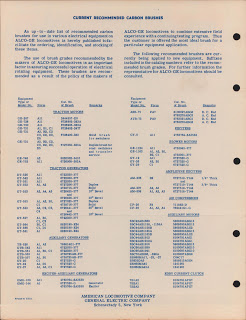 In this case, first we find holiday wishes for a Merry Christmas and a Happy New Year from the American Locomotive and General Electric Companies.   A sentiment we echo at the R&GVRRM.    We also find out that Mr. P.T. Egbert has been promoted to ALCO President after starting his career at American Locomotive in 1922.    On the back, we also find an up-to-date list of carbon brushes to be used in the various electric equipment on ALCO-GE locomotives including traction motors, traction generators, auxiliary generators and more.   A very useful sheet then and possibly useful information today for those of us working to preserve ALCOs of this vintage.

The R&GVRRM has several years of ALCO-GE News in our collection, and we will share more each month.    For now, we will again echo the same sentiment of this newsletter and hopes everyone has a Merry Christmas and a Happy New Year!