Work has continued in earnest on the repaint of Rochester Gas & Electric GE 45-tonner #1941.  After several weeks of paint prep and masking along with the painting of many parts from the engine, the first coat of Brewster Green was applied to the engine on Tuesday evening, July 19th.   This included both the fronts and backs of the engine hood doors which is why they are all open to dry.    A second and final coat is planned for the following Tuesday evening’s work session so long as Mother Nature dials the temperature back a little.   Once the green is well dried, we will move on to complete the yellow and then the black on trucks and undercarriage.   We also plan to reletter the engine back to its RG&E BeeBee Station lettering and logo.

Here are some photos of the #1941 in the shop with the first coat applied taken during the museum’s July membership meeting on Thursday evening, July 21. 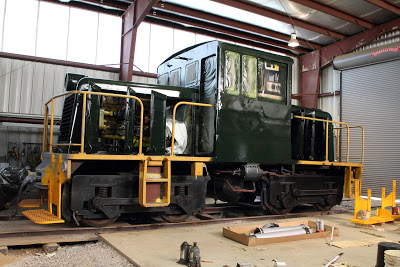 The R&GVRRM continues to welcome donations to offset the nearly $2000.00 cost of repainting the #1941.    You can donate via PayPal via the link or send a check to the address both of which are included in the right hand column of the R&GVRRM’s Support page on its website.

Thanks again for the continued interest, and we are working hard to have this engine complete for our Diesel Day evening in August which is also #1941’s 70th birthday.