The former Buffalo, Rochester & Pittsburgh freight house in Warsaw, N.Y, was demolished on December 21, 2020. The large brick structure located on the corner of Main Street and Washington Street was built by the railroad in 1912, part of a program where the railroad expanded and improved station facilities up and down the line. “A group of Warsaw businessmen — the Warsaw Improvement Company — approached the BR&P in 1910 to run an industrial track into the village to serve its many industries at that time,” according to Gary Farmer, a former member of the Warsaw Historical Society. The railroad runs along a fill high above the town, and the freight house was served via a mile-long switchback branch off the main line, which also served other businesses in town.
Baltimore & Ohio acquired BR&P in 1932, and the freight house passed to private ownership sometime in the 1950s after service on the branch ended. The building was made eligible for the National Register of Historic Places in 1986. The structure had been used for storage for many decades, with the last owner placing the building up for sale in 2016.

The alarm was first sounded on Friday, December 19, when a backhoe was seen removing a portion of the loading dock around the perimeter of the building. Owner Rob Fontaine secured a demolition permit to level the historic structure to make way for the construction of new storage sheds. With mounting opposition from local residents, a stop-work order was secured. Ignoring the order, the freight house was demolished in the early morning hours of Monday, December 21. Under the cover of darkness, the only surviving BR&P brick freight house in New York State was reduced to rubble.

At a subsequent Warsaw Town Board meeting on January 13, 2021, Town Historian Sally Smith reported the freight house was demolished without prior notice to Zoning Officer Bob Martin, or the Joint Planning Board. The Department of Environmental Conservation (DEC) was not notified regarding any hazardous materials removed from the site. The stop-work order was ignored by Fontaine. 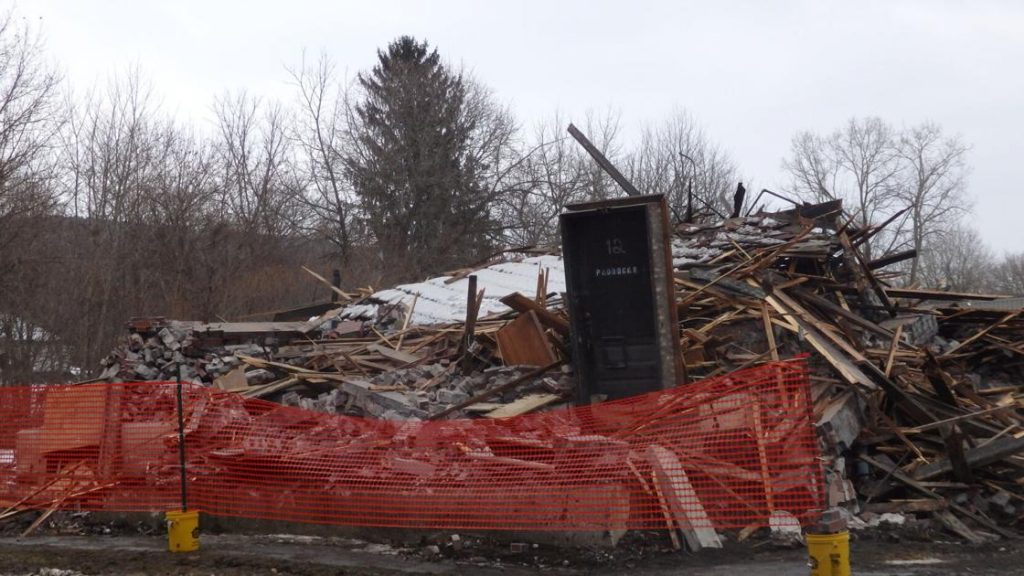 Zoning Officer Martin replied that owner Fontaine was present at a virtual meeting with him and Code Enforcement Officer Alyssa Cutcliffe at the January 12 Planning Board Meeting. Cutcliffe indicated she issued the demolition permit but had incorrect information as the property was zoned industrial, not commercial. The reason for demolition cited on the permit was, “vacant, hazard to the community.” According to the Warsaw Historical Society, the structure was never inspected by Cutcliffe. The structure was also not on the DEC’s list of contaminated sites. The freight house was structurally sound and posed no imminent danger to the property or its surroundings. In fact, the interior was very much original, looking not much different from the days it served the railroad. There appeared to be no valid reason for the hasty demolition. An approved site plan was requested of Fontaine by the town before work could continue on the steel storage sheds being constructed on the site, despite construction already beginning.

At the February 10 Town Board Meeting, Historian Smith revealed the results of her FOIA (Freedom of Information Act) request for the demolition permit. Attending the Planning Board meeting on February 9, Smith reviewed the permit dated November 19, 2020, and indicated it was not signed. Code Enforcement Officer Cutcliffe indicated it was now signed. Because the freight house was eligible for the historic register and preservation, Smith noted that according to the Office of Parks and Recreation Historic Preservation handbook, a Type 1 State Environmental Quality Review (SEQR) would require consulting with the Town Historian. Councilman Chris Lonneville asked if there was any consultation per local code with the Planning Board on tearing the building down. Zoning Officer Martin answered no and continued that the purpose of the Public Hearing was for a site plan to be submitted by owner Rob Fontaine. There was no further discussion, and the minutes of the Planning Board are not available for review.

Despite not having a valid demolition permit, ignoring the town’s stop-work order, and without filing a valid site plan with the Planning Board, Rob Fontaine was able to demolish the historic freight house without any repercussions, and construct his new steel self-storage sheds fronting Main Street. No one has been able to answer on the record why the Historian’s office was cut out from this process, or why the Town disregarded its obligation for review of the demolition permit and failed to coordinate with DEC regarding construction within the Oatka Creek floodplain.

On February 11, The State Historic Preservation Office (SHPO) announced its opinion that a National Register eligible historic district located on South Main Street is viable, including the property that once included the BR&P freight house.

As historians and preservationists, we can only use these events as a cautionary tale and use them in our fight to preserve Rochester’s rich railroading heritage for future generations to enjoy and learn from. We must be even more vigilant to protect not only what we have but also safeguard for the future as well. It’s too late to save the BR&P freight house in Warsaw, but perhaps we can save other historic structures from similar fate. 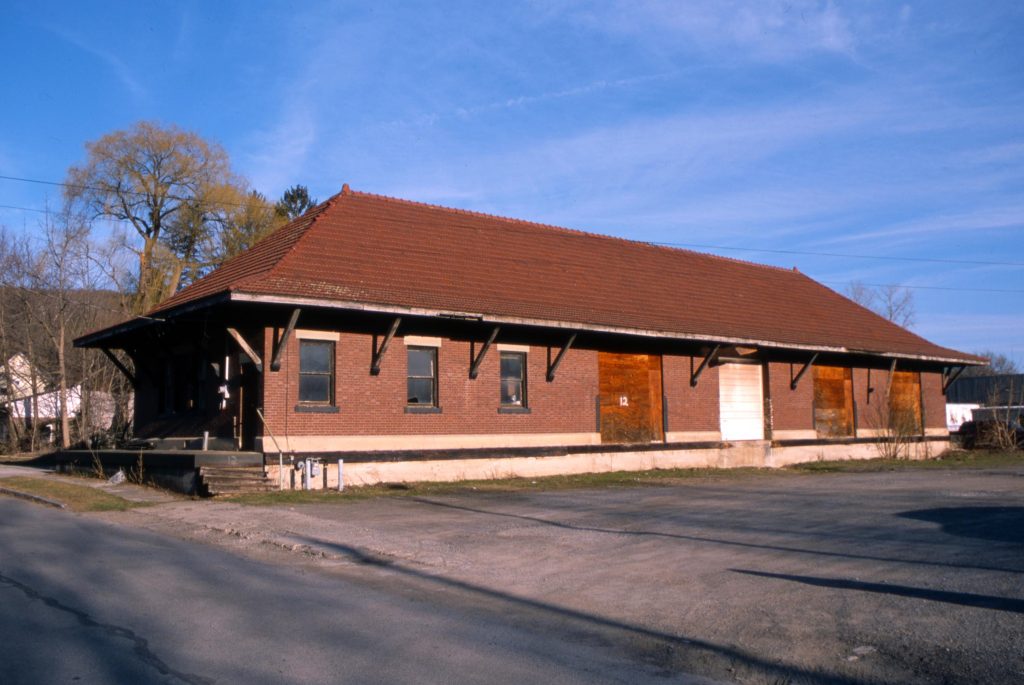