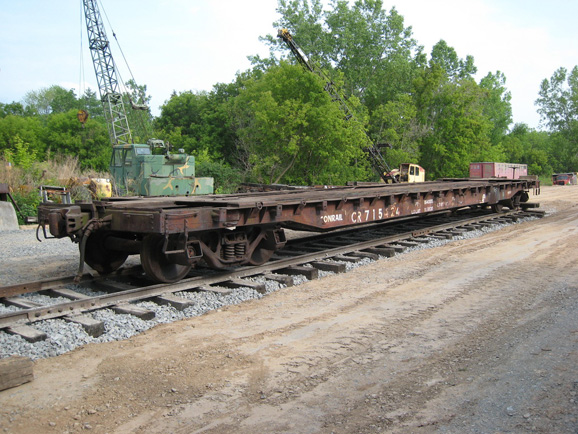 The New York Central cars were a redesign of the PS-4 flat which Pullman had designed as a flexible flat car platform which saw cars built from 48′ 6″ to 60′ long made for seven different railroads.  Some of the cars even included bulkheads at either end.   The NYC cars had 14 stake pockets alternating with Azee lading band anchors every 3′ 8″ on center down the side of the car.   The deck was comprised of 2 3/8″ thick by 5 1/2″ wide wood boards except for steel plates from the bolsters out to the end of the car.

The R&GVRRM plans to restore their car to its as built New York Central appearance including a brand new deck since the old deck was rotted and has been removed.   For now, the museum has been using the car’s 70 ton capacity to aid in the movement of rail stored near the museum’s restoration shop down to the museum’s new siding west of the LA&L where the rail will be used to build the siding.