On the Utica Lines of the New York State Railways, Equipment for Six-Car Train Service Has Been Designed with Inclosed Vestibules and Drop Platforms.

The New York State Railways, Utica Lines, has recently place in service twelve single-ended interurban cars that were specially designed to give entrance and exit facilities equivalent to those commonly obtaining with city cars. Drop platforms with folding doors and steps have been provided at both ends of the car, and bulkheads have been omitted. The arrangement was adopted to permit rapid loading and unloading at points of congested traffic, the service involving a run of about 10 miles without stop to a point where more than 60 per cent of the passengers are discharged. The cars are run in trains varying in length from two to six cars, the composition of each train varying from all motor cars to half motor cars and half trailers.

An all-steel, arch-roof design was adopted in accordance with the general tendency toward these features displayed in modern car construction, and the bodies, which were built by the Cincinnati Car Company, possess several novelties in detail addition to those already outlines. The general dimensions are down in the accompanying table.

Inside of the car body all panels are insulated with cork covered with linoleum. Front and rear dashes have cork insulation only, with interior paneling of steel to form window pockets. The roof is steel riveted to the one piece T-iron carlines which also form the side posts. This surface which is finished white forms the inside finish of the car. The outside of the steel roof is insulated with 1-in. cork, covered with 6-oz. duck. Two thicknesses of 13/16-in. yellow pine, covered with 1/4-in. battleship linoleum make up the floor.

A Peter Smith forced-ventilation hot-air heater, which has a cold air intake arranged so as to take air from an opening in the bottom of the vestibule, is installed, and the interior lighting system comprises one circuit of six 94-watt Mazda lamps arranged with a selector switch.
The seats, which were designed to the railway company’s specifications and manufactured by the Hale & Kilburn Company, are of the non-reversible type, with removable backs and Pantasote upholstering. 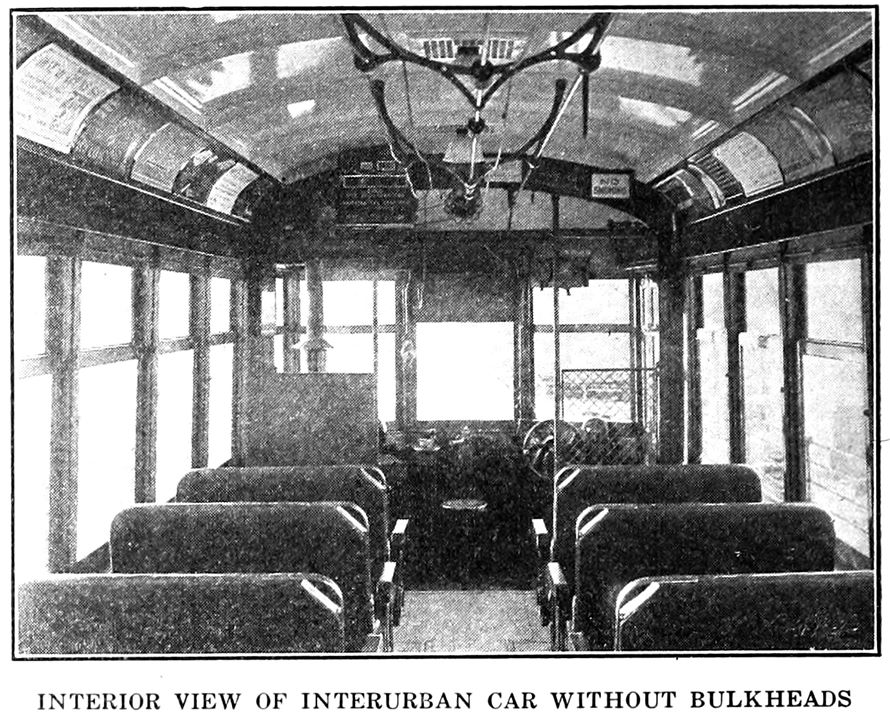 At the forward end of the car the doors, which are operated by the motorman, are inward folding and work in conjunction with the step. At the rear the folding doors are operated by Chicago Pneumatic door engines. These doors are inward folding, and the control mechanism is so arranged that the doors can be operated by the conductor from any point in the car. This is done by a control rod which runs the full length of the car in the same bracket as the bell cord, whistle cord, register cord, etc. As before mentioned, there are no bulkheads in the car, the motorman being amply protected from the light at night by three curtains.

During train operation, the front vestibules are used by passengers as standing room. Therefore provisions are made, by means of a small steel box, to lock up fuses, controller key, brake-valve handle, coupler unlocking valve handle, and air-scraper handle. These operating accessories are locked up at all times, except in the cab of the motorman actually operating the car. As the box is provided with standard switch lock, all motormen and conductors have keys to it. 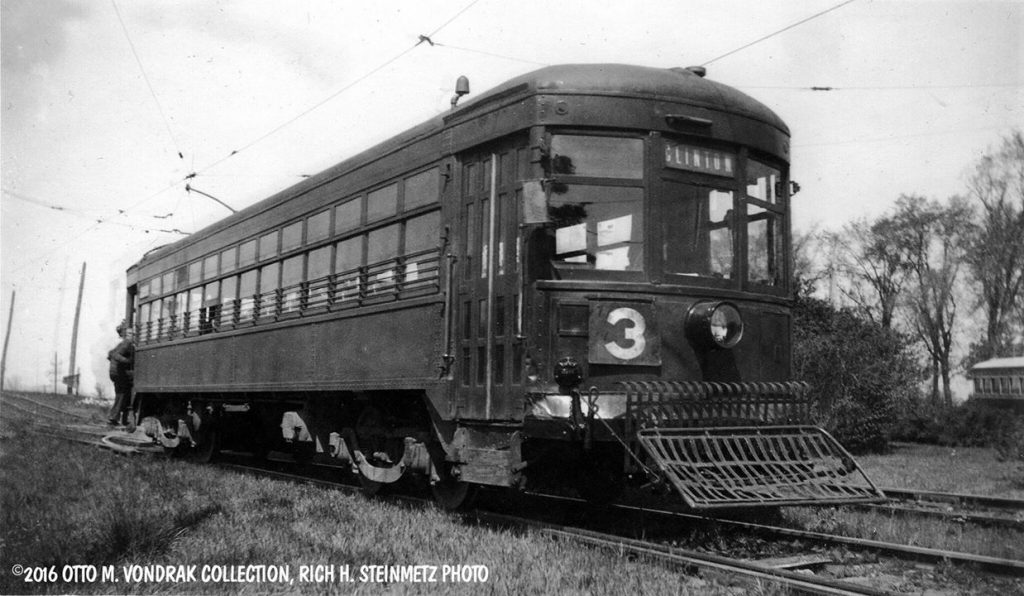 Trucks, Brakes, and Electrical Equipment
Standard Baldwin trucks equipped with M.C.B. journal boxes, EB axles, and inside hung motors are used, but the height of the underside of the floor above the rail of 40 in., together with 35-in. wheels and the requirements of 33 ft. radius curves, made it necessary to design a special central brake beam.

Westinghouse AMM brake equipment was D-2-H compressor and M-22-A brake valve have been provided, this brake valve permitting six-car operation. Westinghouse G-2 automatic car and air couplers also are used. For couplers the uncoupling valves are located in each end of the car. The valve is so designed that is can be operated only by a specially shaped handle, and the latter can be removed only when the coupler valve is in the coupled position, this handle always being kept in the lock box in the cab.

The electric equipment consists of four Westinghouse 306-CV motors arranged for ALM control. As this type of control requires only seven-wire control cable for operation, the nine-wire train and jumper cable, which is standard on this property, permits operation of the signal switch wire, and the feed wire for lights and heater in trailers without any additional receptacles and jumpers.

The cars were equipped by the railway company’s force, and special attention was paid to accessibility for inspectors to all parts of equipment. Everything that would have a tendency to reduce maintenance was given careful consideration. For example, valves that are liable to give trouble can be repaired or cleaned by inspectors, have been arranged with unions on both sides so they may be easily removed when this is necessary in order to make repairs.

When the Utica Lines shut down in 1933, the 12 cars were transferred to Rochester, and operated in the Rochester Subway from 1938 until the end of service in 1956. Rochester Transit Corp. donated Car 60 to our museum in 1956 as the solve surviving example of the fleet. The car is currently being restored by our volunteers.